EURUSD appears to be stuck in a narrow range ahead of the European Central Bank (ECB) meeting on July 25, but the lack of momentum to test the monthly-low (1.1193) may keep the exchange rate afloat as it breaks out of the downward trend from earlier this year.

The ECB is likely to endorse a dovish forward guidance even though the central bank is widely expected to keep Euro area interest rates on hold as the Governing Council struggles to achieve its one and only mandate for price stability. 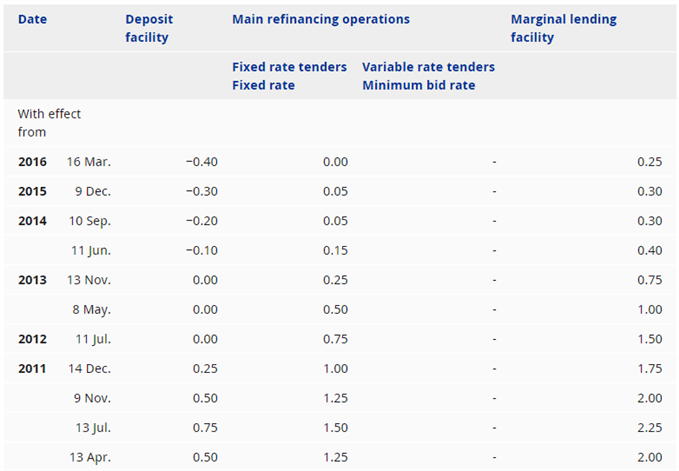 It seems as though the ECB will continue to push monetary policy into unchartered territory as the central bank prepares to launch another round of Targeted Long-Term Refinance Operations (TLTRO) in September, and the Governing Council may show a greater willingness to implement a negative interest rate policy (NIRP) for the Main Refinance Rate, its flagship benchmark for borrowing costs, as the account of the June meeting insists that “the Governing Council needed to be ready and prepared to ease the monetary policy stance further by adjusting all of its instruments, as appropriate, to achieve its price stability objective.”

It remains to be seen if the ECB will make a major announcement as officials argue “that the risk of recession was low,” and the Governing Council may merely opt to buy more time as the European Union nominates former International Monetary Fund (IMF) Managing Director Christine Lagarde to replace President Mario Draghi.

With that said, more of the same from the ECB may keep EURUSD afloat over the remainder of the month especially as the Federal Reserve is widely expected to deliver at least a 25bp rate cut on July 31.

In turn, EURUSD may stage a larger correction as it breaks out of the range-bound price action from May following the failed attempt to test the 1.1000 (78.6% expansion) handle.

Moreover, the pullback from the June-high (1.1412) has stalled around the 1.1190 (38.2% retracement) to 1.1220 (78.6% retracement) region, with the RSI highlighting a similar dynamic as the oscillator continues to track the bullish formation from earlier this year.