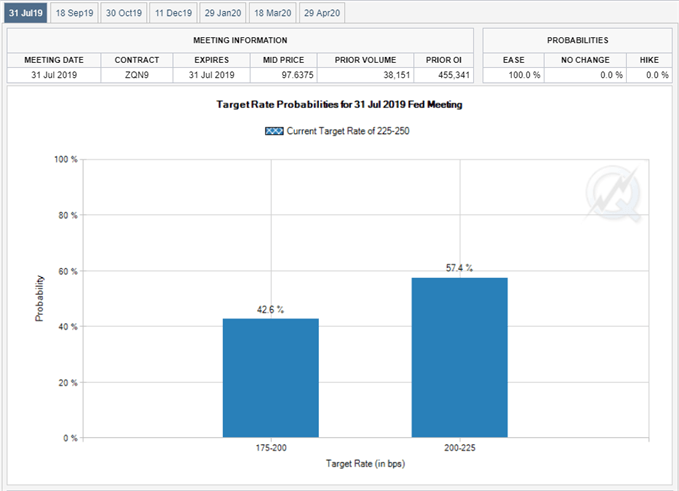 The March-high (1.1448) remains on the radar for EURUSD following the Federal Reserve interest rate decision as the exchange rate breaks out of the downward trend from earlier this year.

The fresh updates from the Federal Open Market Committee (FOMC) suggest the central bank will insulate the economy from the shift in US trade policy as the “apparent progress on trade turned to greater uncertainty.” In turn, Chairman Jerome Powell and Co. may continue to alter the forward guidance for monetary policy as the Trump administration relies on tariffs and sanctions to push its agenda.

With that said, the US dollar stands at risk of facing a more bearish fate over the coming months as eight Fed officials project a lower trajectory for the benchmark interest rate while Fed Fund futures reflect a 100% probability for at least a 25bp reduction at the next decision on July 31.

It remains to be seen if the FOMC will reverse the four rate hikes from 2018 as President Donald Trump tweets “we need rates cuts, & easing,” but current market conditions are likely to keep EURUSD afloat as the FOMC appears to be on track to shift gears over the coming months.

In turn, EURUSD stands at risk for a larger correction as it breaks out of the range-bound price action from May following the failed attempt to test the 1.1000 (78.6% expansion) handle, with the exchange rate trading above the 200-Day SMA (1.1350) for the first time since in over a year.