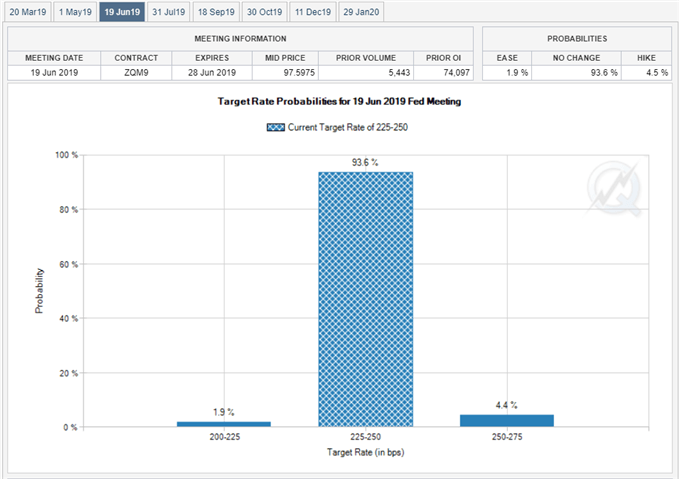 The EUR/USD advance following the European Central Bank (ECB) meeting unravels, with the exchange rate under pressure even as the Federal Reserve drops the hawkish forward-guidance for monetary.

The Federal Open Market Committee’s (FOMC) first meeting for 2019 caught increased attention as the central bank warned of ‘cross currents’ surrounding the economic outlook, and Fed officials may continue to tame bets for higher interest rates as ‘there is elevated uncertainty around several unresolved government policy issues, including Brexit, ongoing trade negotiations, and the effects from the partial government shutdown in the United States.’

In turn, Fed Fund Futures may continue to show the central bank on hold throughout the first-half of the year, but the 304K expansion in U.S. Non-Farm Payrolls (NFP) appears to be raising questions about the shift in Fed rhetoric as the central bank pledges to be ‘data dependent.’ As a result, Chairman Jerome Powell & Co. may find it difficult to defend a wait-and-see approach as the U.S. economy currently shows little to no signs of a recession, with EUR/USD at risk of facing range-bound prices ahead of the next FOMC rate decision on March 20 amid the failed attempt to test the January-high (1.1570).

At the same time, the bullish momentum appears to be abating as the Relative Strength Index (RSI) snaps the upward trend from late-2018, and recent price action warns of a further decline in EUR/USD as the exchange rate carves a series of lower highs & lows. Sign up and join DailyFX Currency Analyst David Song LIVE for an opportunity to discuss potential trade setups. 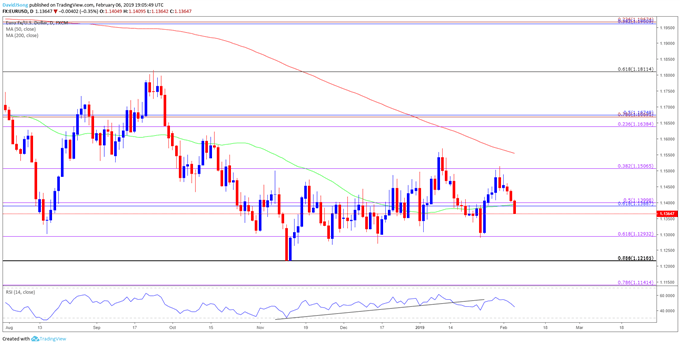 The outlook for EUR/USD has once again become uneventful amid the failed attempt to test January-high (1.1570), with the exchange rate at risk for range-bound prices as the bullish momentum abates. The recent series of lower highs & lows brings the 1.1290 (61.8% expansion) region on the radar, which largely lines up with the 2019-low (1.1290), with the next region of interest coming in around 1.1220 (78.6% retracement).