EUR/USD attempts to retrace the decline from earlier this week as updates to the U.S. Consumer Price Index (CPI) instill a mixed outlook for the economy, but the data print may do little to derail the Federal Reserve from the hiking-cycle as the shift in trade policy is expected to fuel inflation.

In fact, Fed Fund Futures still reflect expectations for a December rate-hike as the Federal Open Market Committee (FOMC) largely achieves its dual mandate for monetary policy, and the central bank may continue to implement higher borrowing-costs in 2019 as ‘participants generally anticipated that further gradual increases in the target range for the federal funds rate would most likely be consistent with a sustained economic expansion, strong labor market conditions, and inflation near 2 percent over the medium term.’ 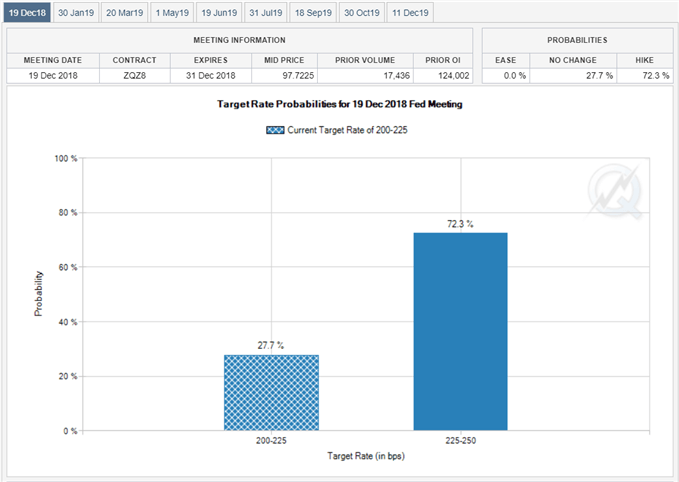 Moreover, the fresh updates from Chairman Jerome Powell & Co. may fuel bets for an extended hiking-cycle as ‘several participants reported that firms in their Districts that were facing higher input prices because of tariffs perceived that they had an increased ability to raise the prices of their products,’ and speculation for above-neutral interest rates is likely to keep EUR/USD under pressure especially as the European Central Bank (ECB) remains in no rush to normalize monetary policy.

However, the ECB may gradually alter the forward-guidance over the coming months as board member Jens Weidmann argues that the central bank ‘can’t lose time unnecessarily on the long road back to monetary policy normality,’ and the Governing Council may continue to scale back the dovish tone in 2019 as ‘the economic upturn in Germany and the euro area remains intact.’

Until then, the zero-interest rate policy (ZIRP) in Europe may continue to produce headwinds for EUR/USD, with the weakness in the exchange rate likely to carry into the end of 2018 as the exchange rate finally clears the August-low (1.1301). Sign up and join DailyFX Currency Analyst David Song LIVE for an opportunity to discuss potential trade setups. 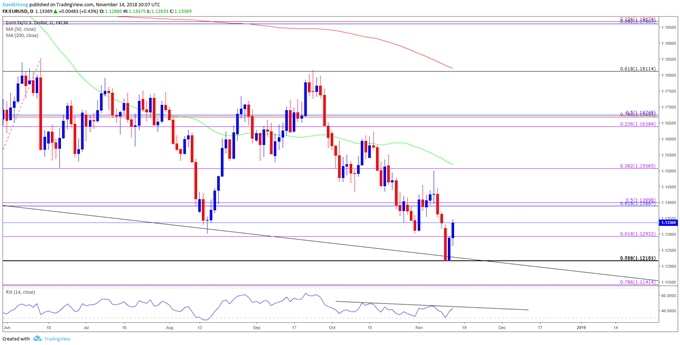 EUR/USD slips to fresh yearly lows after the failed attempt to push back above the 1.1510 (38.2% expansion) region, with recent developments in the Relative Strength Index (RSI) casting a bearish outlook for the exchange rate as it extends the downward trend carried over from the previous month. In turn, the 1.1220 (78.6% retracement) area sits on the radar, with the next downside hurdle coming in around 1.1140 (78.6% expansion).