EUR/USD may consolidate over the remainder of the month as the U.S. Gross Domestic Product (GDP) report does little to alter the monetary policy outlook, and mixed data prints coming out of the world’s largest economy may keep the Federal Reserve on hold in November as it limits the threat for above-target inflation. 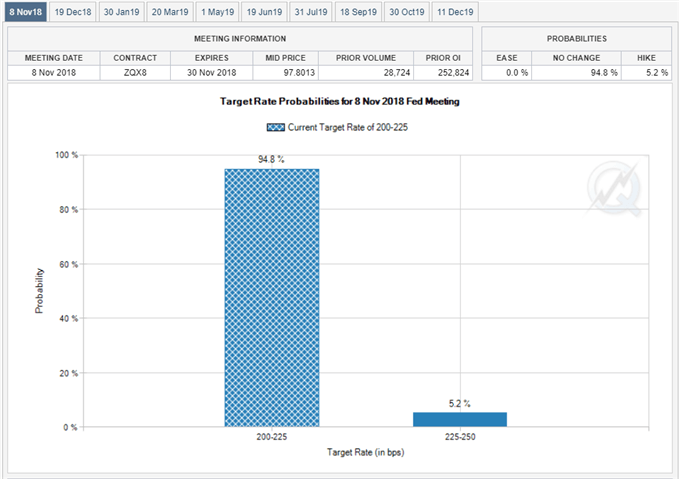 The Federal Open Market Committee (FOMC) may stick to the sidelines after implementing higher borrowing-costs in September as ‘members agreed that the timing and size of future adjustments to the target range for the federal funds rate would depend on their assessment of realized and expected economic conditions relative to the Committee's maximum-employment objective and symmetric 2 percent inflation objective,’ but the central bank may ultimately prepare U.S. households and businesses for an imminent rate-hike as ‘several participants reported that firms in their Districts that were facing higher input prices because of tariffs perceived that they had an increased ability to raise the prices of their products.’

In turn, Chairman Jerome Powell & Co. may show a greater willingness to extend the hiking-cycle as the adjustment in U.S. trade policy is expected to inflate import prices, and a growing number of Fed officials may warn of above-neutral interest rates as the economy sits a full-employment. Meanwhile, recent remarks from the European Central Bank (ECB) suggest the Governing Council will retain its current course in winding down the asset-purchases as the quantitative easing (QE) program is set to expire in December, and it seemed as though President Mario Draghi & Co. will carry the zero-interest rate policy (ZIRP) well into 2019 as euro-area borrowing-costs are expected ‘to remain at their present levels at least through the summer of 2019.’

With that said, the current environment casts a bearish outlook for EUR/USD especially as it snaps the monthly range, and the exchange rate may continue to target fresh 2018 lows over the coming months as the FOMC is widely expected to deliver a December rate-hike, However, the failed attempt to test the August-low (1.1301) may generate a near-term rebound as euro-dollar snaps the series of lower highs & lows from the previous week. Sign up and join DailyFX Currency Analyst David Song LIVE for an opportunity to discuss potential trade setups. 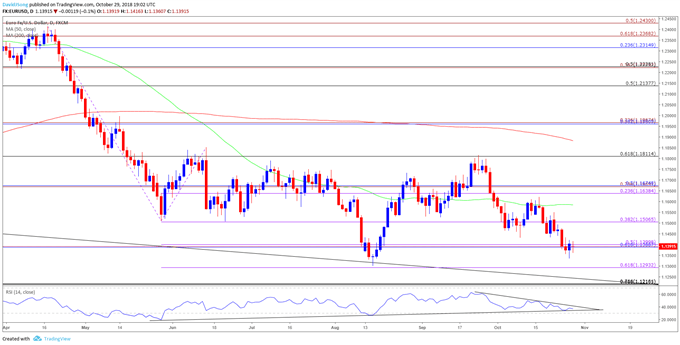 The broader range for EUR/USD is back on the radar following the failed attempt to test the 2018-low (1.1301), with the first hurdle coming in around the 1.1510 (38.2% expansion) followed by the Fibonacci overlap around 1.1640 (23.6% expansion) to 1.1680 (50% retracement). Will need to keep a close eye on the Relative Strength Index (RSI) as it appears to be on track to threaten the upward trend from earlier this year, with a break of the bullish formation warning of EUR/USD losses.