EUR/USD struggles to hold its ground ahead of the European Central Bank (ECB) interest rate decision as euro-area sentiment sours in October, and the exchange rate may continue to give back the rebound from the 2018-low (1.1301) as it snaps the opening range for October.

The ECB meeting may do little to prop up the single currency as the Governing Council remains in no rush to remove the zero-interest rate policy (ZIRP), and President Mario Draghi & Co. may stick to the same script as the central bank appears to be on a preset course to wind down its quantitative easing (QE) program ahead of the December deadline.

Keep in mind, the ECB may continue to push a dovish forward-guidance as underlying inflation remains below target, and the central bank may keep the door open to further support the monetary union as ‘growth projections for 2018 and 2019 had been revised down slightly, mainly reflecting weaker foreign demand.’ In turn, the Governing Council may reiterate its forecast that euro-area interest rates ‘would remain at their present levels at least through the summer of 2019,’ and more of the same from the ECB is likely to keep EUR/USD under pressure especially as the Federal Reserve appears to be on track to deliver another rate-hike in 2018.

Fresh remarks from Atlanta Fed President Raphael Bostic, a voting-member on the Federal Open Market Committee (FOMC), suggests the central bank will continue to implement higher borrowing-costs as ‘the economy is performing well enough to stand on its own without support from accommodative monetary policy,’ and it seems as though the central bank will increase the benchmark interest rate by another 25bp in December as the hiking-cycle remains ‘appropriate until we get to a neutral policy rate.’ 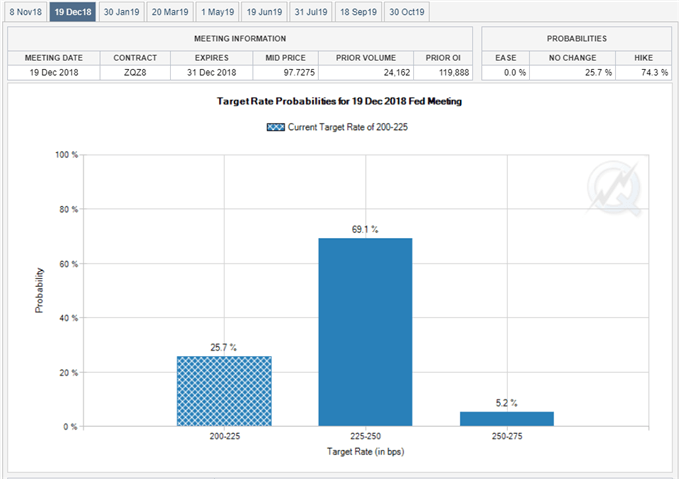 As a result, Chairman Jerome Powell & Co. may prepare U.S. households and businesses for an imminent rate-hike at the next meeting in November, and Fed Fund Futures may continue to reflect expectations for a move in December as the committee largely achieves its dual mandate for full-employment and price stability.

With that said, the current environment brings the downside targets on the radar for EUR/USD, with recent price action raising the risk for further loses as the exchange rate snaps the monthly opening range. At the same time, keep a close eye on the Relative Strength Index (RSI) as it comes up against trendline support, with a break of the bullish formation casting a bearish outlook for the euro-dollar exchange rate. Sign up and join DailyFX Currency Analyst David Song LIVE for an opportunity to discuss potential trade setups. 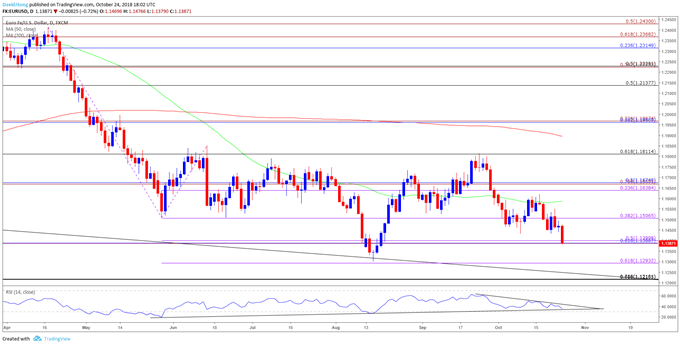