EUR/USD struggles to hold its ground following the European Central Bank (ECB) meeting as the Governing Council keeps the door open to further support the monetary union, while the Federal Reserve appears to be on track to carry its hiking-cycle into 2019.

The lack of new details surrounding the ECB’s exit strategy suggests the central bank is in no rush to move away from its highly accommodative stance as ‘the outlook for real GDP growth has been revised down slightly for 2018 and 2019, mainly due to a somewhat weaker contribution from foreign demand,’ and President Mario Draghi & Co. may largely endorse a wait-and-see approach at the next meeting on October 25 as ‘risks relating to rising protectionism, vulnerabilities in emerging markets and financial market volatility have gained more prominence recently.’

In contrast, the Federal Open Market Committee (FOMC) looks poised to further embark on its hiking-cycle as the central bank largely achieves its dual mandate for monetary policy, and Chairman Jerome Powell & Co. may continue to prepare U.S. households and businesses for higher borrowing-costs as ‘the Committee expects that further gradual increases in the target range for the federal funds rate will be consistent with sustained expansion of economic activity, strong labor market conditions, and inflation near the Committee's symmetric 2 percent objective over the medium term.’ 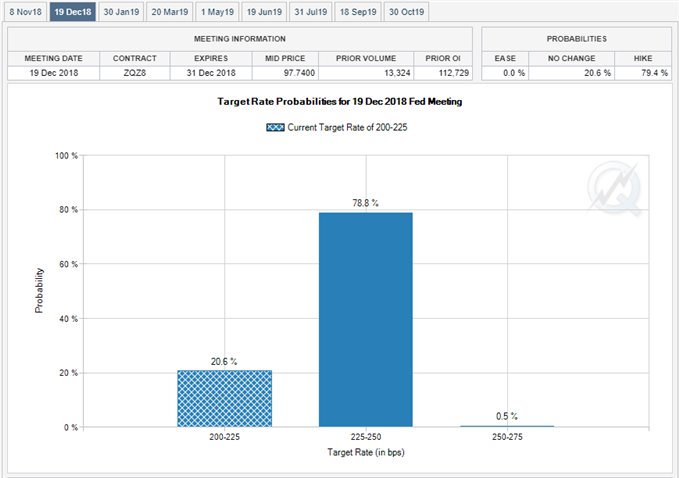 With that said, Fed Fund Futures may continue to reflect expectations for another rate-hike at the next quarterly meeting in December, and the deviating paths between the ECB and the Fed is likely to keep EUR/USD under pressure as both central banks show little to no interest in altering the forward-guidance for monetary policy.

In turn, the failed attempt to test the June-high (1.1852) brings the downside targets back on the radar for EUR/USD especially as it takes out the September-low (1.1526), with recent price action raising the risk for further losses as the Relative Strength Index (RSI) snaps the bullish formation carried over from August. Sign up and join DailyFX Currency Analyst David Song LIVE for an opportunity to discuss potential trade setups! 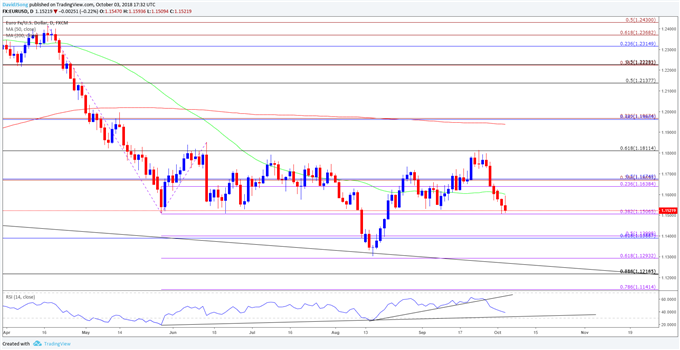