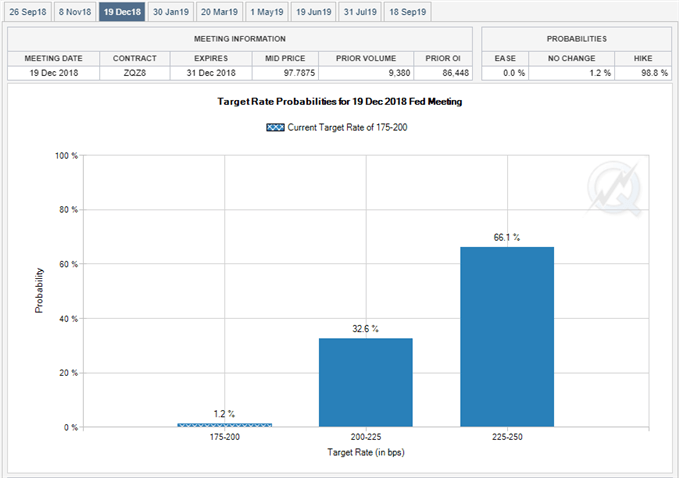 The recent selloff in EUR/USD appears to have stalled ahead of the June 2017-low (1.1119) as it snaps the series of lower highs & lows from earlier this month, and fresh developments in the Relative Strength Index (RSI) warn of a larger recovery in the exchange rate as the oscillator bounces back from oversold territory.

Keep in mind, the euro-area’s exposure to Turkey may continue to produce headwinds for the single-currency as the U.S. alters it trade policy, with President Donald Trump tweeting that ‘Tariffs are now leading us to great new Trade Deals,’ and the ongoing adjustment may push the European Central Bank (ECB) to further support the monetary union as ‘uncertainties related to global factors, including the threat of increased protectionism, have become more prominent.’

With that said, the diverging paths for monetary policy may continue to foster a longer-term bearish outlook for EUR/USD as President Mario Draghi & Co. remain in no rush to move away from its easing-cycle while the Federal Reserve appears to be on track to deliver four rate-hikes in 2018. Fed

Fund Futures still show market participants gearing up for a move in September and December as Chairman Jerome Powell & Co. largely achieve the dual mandate for full-employment and price stability, and bets for higher borrowing-costs may keep EUR/USD under pressure throughout the remainder of the year as the ECB continues to carry out its quantitative easing (QE) program.

As a result, the broader outlook for EUR/USD remains tilted to the downside, with the exchange rate at risk of exhibiting a more bearish behavior as it finally snaps the range-bound price action from June. However, recent developments in the RSI warrants attention as it appears to be bouncing back from oversold territory, with a move above 30 raising the risk for a larger rebound in the exchange rate as the oscillator flashes a textbook buy-signal. Sign up and join DailyFX Currency Analyst David Song LIVE for an opportunity to discuss potential trade setups! 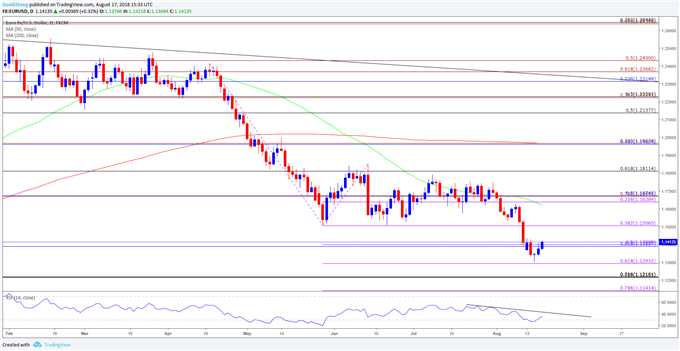 Broader outlook for EUR/USD remains tilted to the downside following the break of the June-low (1.1508), but the failed attempt to clear the 1.1290 (61.8% expansion) region raises the risk for a larger rebound especially as the exchange rate carves a fresh series of higher highs & lows. At the same time, the Relative Strength Index (RSI) has snapped from oversold territory, but the oscillator may continue to exhibit a bearish behavior as it extends the downward trend carried over from the previous month. In turn, a break/close above the 1.1390 (61.8% retracement) to 1.1400 (50% expansion) region may spur a move back towards the former-support zone around 1.1510 (38.2% expansion).