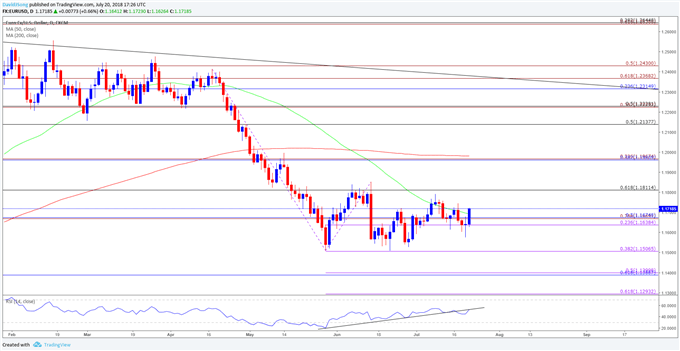 The recent rebound in EUR/USD unravels as Federal Reserve Chairman Jerome Powell strikes a hawkish outlook for monetary policy, and the failed attempt to test the July-high (1.1791) keeps the broader outlook tilted to the downside as the central bank appears to be on course to implement higher borrowing-costs over the coming months.

Even though President Donald Trump disapproves of the strength in the U.S. dollar, recent remarks from Chairman Powell suggests the that only signs of a recession would deter the central bank from raising the Fed Fund rate closer to neutral, and the Federal Open Market Committee (FOMC) may continue to carry out its hiking-cycle over the coming months as the U.S. economy is in ‘good place.’

In contrast, the European Central Bank (ECB) may stick to the current script at the next meeting on July 26 as the quantitative easing (QE) program is now set to expire in December, and more of the same from President Mario Draghi and Co. may drag on the Euro as the Governing Council keeps the door open to further support the monetary union.

In turn, EUR/USD may continue to consolidate over the coming days, with the June-low (1.1508) on the radar as the monthly opening range snaps. Keep in mind, the Relative Strength Index (RSI) has already flashed a bearish signal as it failed to retain the upward trend from the previous month, with the broader outlook for the euro-dollar exchange rate tilted to the downside as the Fed appears to be on track to implement four rate-hikes in 2018. Sign up and join DailyFX Currency Analyst David Song LIVE for an opportunity to discuss potential trade setups!