Implications of Oversold EUR/USD Reading Ahead of FOMC, ECB Minutes

EUR/USD bounces back from a fresh 2018-low (1.1717) as a growing number of Federal Reserve officials tame bets for four rate-hikes in 2018, but the summary of the European Central Bank (ECB) meeting may keep the pair under pressure as the Governing Council remains reluctant to move away from its easing-cycle. At the same time, recent price action suggests the bearish momentum remains in play as the Relative Strength Index (RSI) continues to flash an extreme reading, with euro-dollar at risk for further losses as long as the oscillator sits in oversold territory.

Comments from Atlanta Fed President Raphael Bostic suggest the central bank will continue to normalize monetary policy over the coming months, but there appears to be limited interest in extending the hiking-cycle as the 2018 voting-member on the Federal Open Market Committee (FOMC) anticipates ‘two more’ rate-hikes over the remainder of year. In turn, Chairman Jerome Powell and Co. may utilize the FOMC Minutes to anchor interest rate expectations, and the central bank may show a greater willingness to tolerate above-target price growth for the foreseeable future as ‘market-based measures of inflation compensation remain low.’

Meanwhile, the ECB may largely endorse a wait-and-see approach for monetary policy as the Governing Council struggles to achieve its one and only mandate for price stability, and the central bank may merely stick to the current script as ‘measures of underlying inflation remain subdued and have yet to show convincing signs of a sustained upward trend.’ As a result, more of the same from President Mario Draghi and Co. may produce headwinds for the Euro as the ECB continues to expand its balance sheet. Sign up and join DailyFX Currency Analyst David Song LIVE for an opportunity to discuss potential trade setups! 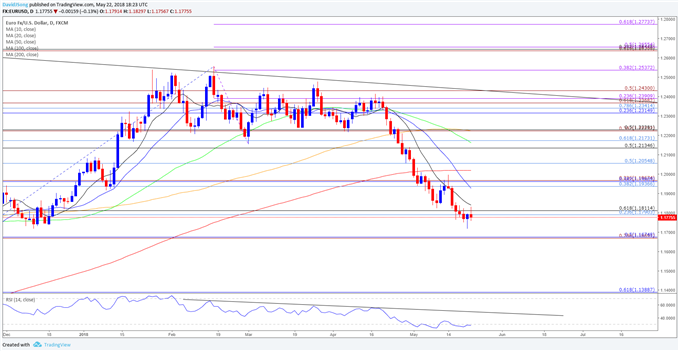 EUR/USD snaps the series of lower highs & lows from the previous week, with the failed attempt to 1.1670 (78.6% expansion) to 1.1680 (50% retracement) raising the risk for a near-term rebound in the exchange rate. However, the Relative Strength Index (RSI) continues to flash an extreme reading as it sits in oversold territory, with euro-dollar at risk of a further decline as long as the oscillator holds below 30. In turn, the break of the December-low (1.1718) keeps the 1.1670 (78.6% expansion) to 1.1680 (50% retracement) region on the radar, with the next region of interest coming in at the November-low (1.1554).