EUR/USD struggles to hold its ground ahead of the European Central Bank (ECB) interest rate decision, with recent price action highlighting the risk for a further decline, while the rebound in EUR/AUD appears to be stalling ahead of the 2018-high (1.6192).

The President Mario Draghi and Co. may merely attempt to buy more time as ‘measures of underlying inflation remain subdued and have yet to show convincing signs of a sustained upward trend,’and more of the same from the Governing Council may do little to curb the recent decline in EUR/USD as the central bank continues to expand its balance sheet. As a result, the Euro may exhibit a more bearish behavior ahead of the second-half of the year as market participants push out bets for a rate-hike.

However, a material shift in the forward-guidance for monetary policy may heighten the appeal of the single-currency as the ECB pledges to conclude its quantitative easing (QE) program in September, and a more detailed exit strategy may trigger a bullish reaction in the single-currency as it boosts bets for higher borrowing-costs in the euro-area. Interested in having a broader discussion on current market themes? Sign up and join DailyFX Currency Analyst David Song LIVE for an opportunity to discuss potential trade setups! 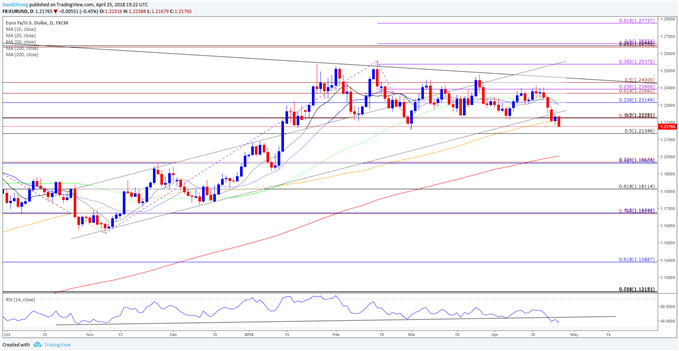 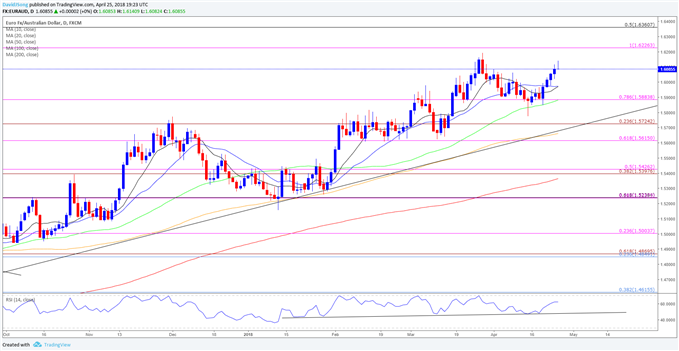 EUR/AUD has staged a rebound following the string of failed attempts to close below the 1.5880 (78.6% expansion) region, and the pair appears to be making a run at the 2018-high (1.6192) as it extends the bullish sequence from earlier this week.