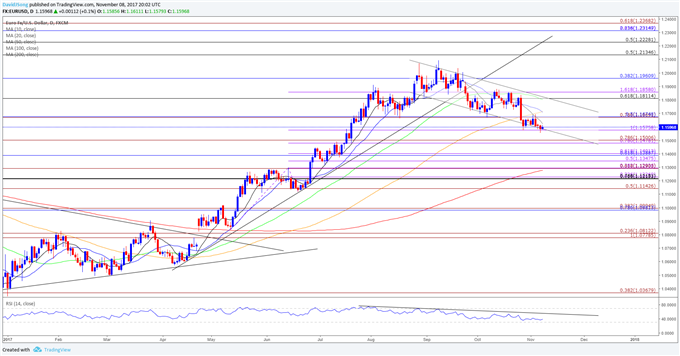 EUR/USD remains under pressure despite the mixed figures surrounding the U.S. Non-Farm Payrolls (NFP) report, and the pair stands at risk of extending the decline from September as a head-and-shoulders formation unfolds.

With the European Central Bank (ECB) on course to carry the quantitative easing (QE) program into 2018, the single-currency may exhibit a more bearish behavior ahead of the next meeting on December 14 as the Governing Council notes that the ‘net asset purchases are intended to continue at a monthly pace of €30 billion until the end of September 2018, or beyond, if necessary.’ The ongoing expansion in the ECB’s balance sheet is likely to keep EUR/USD under pressure, with the pair at risk giving back the advance from the summer months especially as the Federal Open Market Committee (FOMC) is widely anticipated to deliver a December rate-hike.

Keep in mind, the FOMC may continue to implement three rate-hikes per year as President Donald Trump appoints Governor Jerome Powell to lead the central bank, but the mixed developments coming out of the U.S. economy may limit the Fed’s scope to implement higher borrowing-costs as inflation continues to run below the 2% target. As a result, the FOMC may deliver a dovish rate-hike in December, and a growing number of Fed officials to trim the longer-run forecast for the benchmark interest rate as ‘market-based measures of inflation compensation remain low; survey-based measures of longer-term inflation expectations are little changed, on balance.’

Downside targets remain on the radar for EUR/USD as a head-and-shoulders appears to be in play, with the lack of momentum to push back above the neckline around 1.1670 (50% retracement) raising the risk for a further decline in the exchange rate as the pair extends the series of lower-highs from the previous week.