EUR/USD stands at risk of facing a larger correction as it fails to retain the range from earlier this month, with the pair initiating a series of lower highs & lows ahead of the Euro-Zone Consumer Price Index (CPI).

Even though the Federal Open Market Committee (FOMC) is widely anticipated to retain the current policy at the next decision on October 31, Fed Fund Futures are pricing a greater than 80% probability for a December rate-hike especially as Chair Janet Yellen warns ‘without further modest increases in the federal funds rate over time, there is a risk that the labor market could eventually become overheated, potentially creating an inflationary problem down the road that might be difficult to overcome without triggering a recession.’ The fresh remarks suggest the FOMC will stay on course to deliver three rate-hikes in 2017 as central bank officials become ‘wary of moving too gradually,’ but the broader shift in EUR/USD behavior may continue to unfold over the coming months as the European Central Bank (ECB) shows a greater willingness to move away from its easing-cycle.

With the headline reading for euro-area inflation anticipated to pick up for the second consecutive month in September, signs of faster price growth may limit the downside risk for EUR/USD as it puts pressure on President Mario Draghi and Co. to alter the monetary policy outlook at the next meeting on October 26. In turn, the ECB may prepare to wind down its quantitative easing (QE) program ahead of the December deadline as ‘the economic expansion, which accelerated more than expected in the first half of 2017, continues to be solid and broad-based across countries and sectors.’ 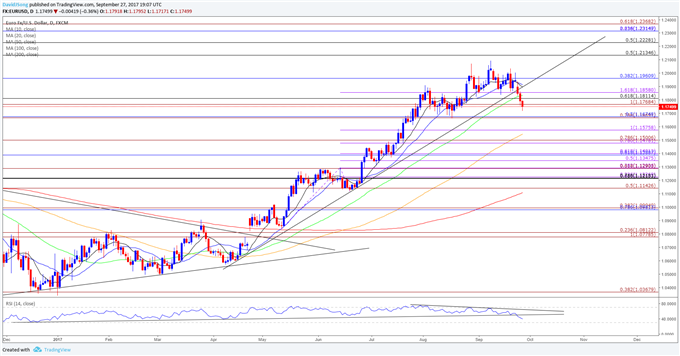 Broader forecast for EUR/USD remains constructive as the pair clears the 2015-range, but the near-term outlook remains capped by the 1.2130 (50% retracement) hurdle, with the downside targets coming back on the radar as the pair finally breaks/closes below the 1.1860 (161.8% expansion) region. In turn, EUR/USD may face a more meaningful correction as both price and the Relative Strength Index (RSI) snap the bullish formations from earlier this year, and the recent series of lower highs & lows may spur a move back towards the August-low (1.1662), which lines up with the Fibonacci overlap around 1.1670 (50% retracement) to 1.1680 (50% retracement). 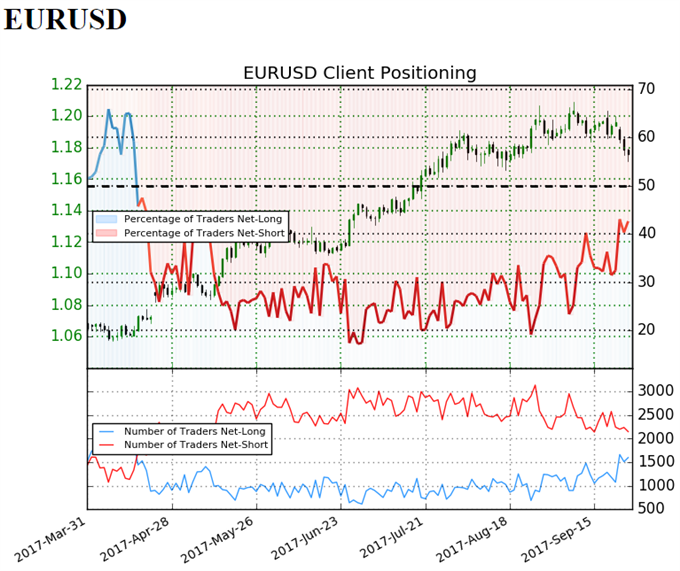