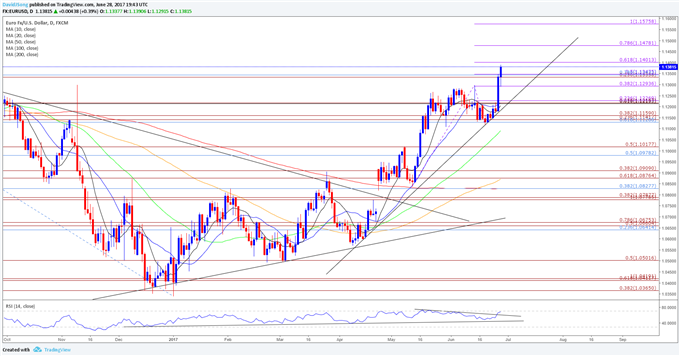 EUR/USD faced a near-term pullback following the Federal Open Market Committee’s (FOMC) June rate-hike, but the broader outlook remains tilted to the topside especially as the European Central Bank (ECB) adopts a less dovish tone going into the second-half of the year.

While speaking at the ECB’s Forum on Central Banking, President Mario Draghistruck an improved outlook for the monetary union and noted that ‘deflationary forces have been replaced by reflationary ones,’ with the comments suggesting the Governing Council will look through the weakness in euro-area inflation as price growth is largely dampened by temporary factors. Even though the ECB remains in no rush to remove the zero-interest rate policy (ZIRP), President Draghi and Co. may continue to alter the outlook and look to wind down its quantitative easing (QE) program over the coming months as the asset purchases are intended to run until December.

With the ECB now forecasting the euro-area to expand an annualized 1.9% in 2017, a growing number of Governing Council officials may display a greater willingness to gradually move away from the easing-cycle, but market participants appear to be unconvinced the Federal Open Market Committee (FOMC) will deliver three rate-hikes in 2017 as Fed Fund Futures still highlight a 50/50 chance for a move in December.

The Relative Strength Index (RSI) also reinforces a constructive outlook for EUR/USD as the oscillator breaks out of the bearish formation from the previous month. Keep in mind, failure to push into overbought territory may generate a near-term correction in the exchange rate as the bullish momentum shows signs of exhaustion. 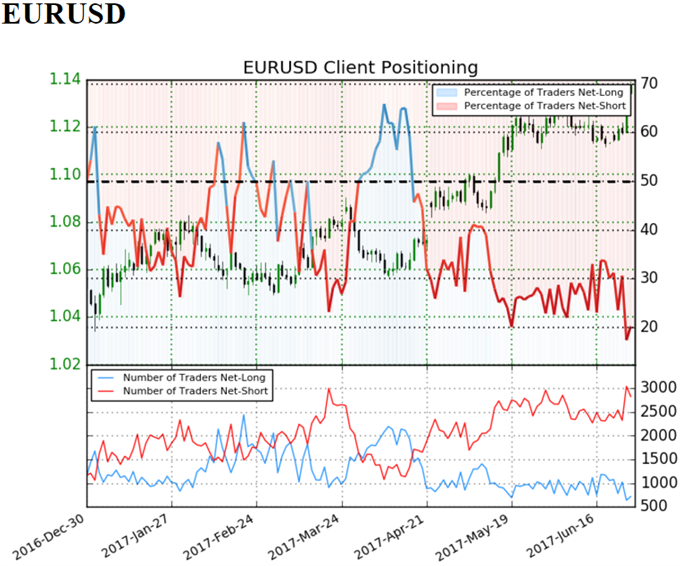 Retail trader data shows 20.3% of traders are net-long EUR/USD with the ratio of traders short to long at 3.93 to 1. In fact, traders have remained net-short since April 18 when EUR/USD traded near 1.0589; price has moved 7.4% higher since then. The number of traders net-long is 7.2% lower than yesterday and 42.1% lower from last week, while the number of traders net-short is 8.5% lower than yesterday and 13.7% higher from last week. For more information on retail sentiment, check out the new gauge developed by DailyFX based on trader positioning.