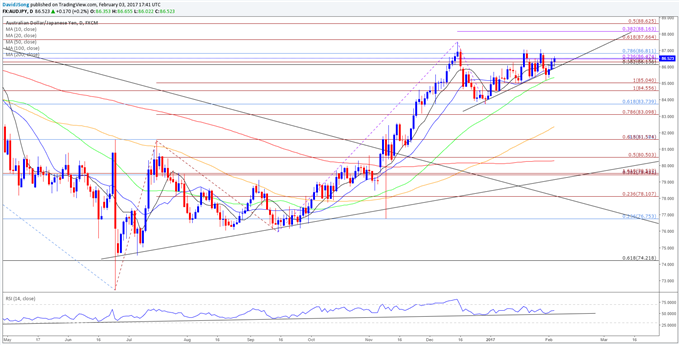 AUD/JPY Continues to Coil Within 2017 Range Ahead of RBA

AUD/JPY may face range-bound conditions ahead of the Reserve Bank of Australia’s (RBA) first interest rate decision for 2017 as it remains stuck in a holding pattern, but a pickup in risk sentiment may fuel the near-term advance in the exchange rate as it boosts carry-trade interest.

With the RBA widely expected to keep the official cash rate at the record-low of 1.50%,more of the same rhetoric may produce a limited market reaction, but the fresh comments from Governor Philip Lowe and Co. may heighten the appeal of the higher-yielding currency should the central bank show a greater willingness to move away from its easing-cycle. At the same time, the Bank of Japan (BoJ) appears to be on course to further expand its balance sheet as Governor Haruhiko Kuroda and Co. stick to the quantitative/qualitative easing (QQE) program with Yield Curve Control, and risk sentiment may play an increase role in influencing the aussie-yen exchange rate as both central bank are expected to stick with the status quo.

With that said, AUD/JPY appears to be stuck in a wedge/triangle formation, with the broader outlook tilted to the topside especially as the Relative Strength Index (RSI) responds to the bullish formation carried over from 2016. The pair may coil for a move higher as it continues to consolidate above the Fibonacci overlap around 84.60 (100% expansion) to 85.00 (100% expansion), with a break/close above 86.80 (78.6% retracement) opening up the next topside region of interest around 87.70 (61.8% expansion).