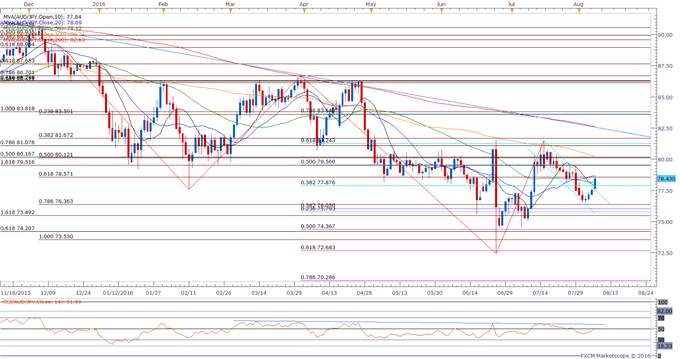 The broader outlook for AUD/JPY remains tilted to the downside as the pair preserves the bearish formation from back in 2014, but the aussie-yen may mount a larger recovery over the near-term as it breaks out of a descending channel and appears to be carving an inverse head-and-shoulders formation.

After cutting the benchmark interest rate to a fresh record-low of 1.50% in August, the Reserve Bank of Australia (RBA) looks poised to endorse a wait-and-see approach at the next policy meeting in September especially as Governor Glenn Stevens prepares to depart from the central bank. As a result, the transition may keep the Australian dollar afloat over the near-term as the market participants the new governor, Philip Lowe, to retain the current policy throughout the remainder of the year.

At the same time, Japanese officials may boost their efforts to weaken the local currency especially as the Bank of Japan (BoJ) struggles to achieve its 2% target for inflation, and the central bank may take additional steps to bolster the ailing economy as Governor Haruhiko Kuroda pledges to conduct a ‘comprehensive review’ for the next interest-rate decision on September 21. Indeed, there’s lingering speculation that the BoJ will further embark on its easing cycle and announce additional measures to encourage a stronger recovery in Japan, but another attempt to buy more time may largely heighten the appeal of the Yen especially as the region returns to its historical role as a net-lender to the world economy.

With that said, AUD/JPY may grind higher ahead of the interest-rate decisions scheduled for September, but we will keep a close eye around 81.20 (61.8% retracement) to 81.70 (38.2% expansion) following the string of failed attempts to close above the Fibonacci overlap.