DailyFX Quarterly Forecasts for Q4 and are available here

The Australian Dollar is in some respects a very difficult currency to forecast right now, but nonetheless there is rational hope that it can hold on to its recent gains.

That difficulty lies in the currency’s clear sensitivity to both today’s major global risk drivers, neither of which seems likely to be resolved any time soon.

Australia’s links to the US-China trade story are obvious. The country exports vast amounts of raw material to the former and has firm political and military ties to the latter. What is perhaps less explicable are the Aussie’s sensitivity to Brexit headlines. That’s a fact too though. According to UBS no currency except Sterling is as in thrall to this tortured tale.

There is also a plethora of other likely impulses. Weaker commodity prices, strong local employment data and so on.

However, in all this it’s easy to forget the Reserve Bank of Australia’s mandate, which is to keep consumer price inflation within a 2-3% band over time, something it has failed to do since 2015. Official numbers on this are released only quarterly, with the third quarter’s release due on October 30.

If the annualized rate ticks up to 1.8%, from last quarter’s 1.6%, the market may well take some comfort that the measure is at least moving in the right direction. Doubts have been growing about how much further down Australian rates may go. The Official Cash Rate is at a 0.75% record low now.

The RBA May Not Cut Rates As Deeply

The Reserve Bank of Australia has evinced doubts about the likely effect of further rate cuts, and fretted aloud about Aussie consumers’ frightening debt levels. Futures markets have pared expectations about how far lower rates could go. An inflation uptick could see more of this, with commensurate support for AUD/USD likely if so.

Of course, the Australian Dollar will remain vulnerable to swings in world risk appetite, especially those generated by the big stories. But domestic inflation data may return focus to the Australian economy, and that could provide the already perky AUS/USD with a bit more support yet. 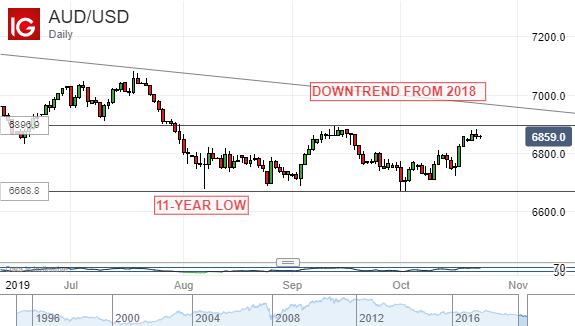 However, its important to be aware that the Australian Dollar remains well with an entrenched downtrend from 2018, close to eleven-year lows and, for the moment, below its last significant high.

Once the effects of any inflation uptick fade, the currency will return quite quickly to its usual risk sensitivity. Gains may be best seen as better opportunities to go short unless sustained, significant progress towards that downtrend line come with them.

NZD Slips Could Be Worth Buying Against Macro Risk Backdrop

AUD/USD Could Get Fed Boost, But It's Not Likely To Last