Japanese Yen Still Mired Against US Dollar On Daily Chart

New DailyFX Quarterly Forecasts for Q4 and are available here

The Japanese Yen has looked a little stronger against the US Dollar as October has progressed, with USD/JPY significantly below the 2018 peak set early in the month.

However, the Japanese currency’s fightback has not been built-upon very much in the past two weeks, which have rather seen quite narrow range trading for the greenback between JPY111.20 and 112.87.

The two currencies have been engaged in a battle of the havens, for sure. Both are sought by investors when risk appetite is battered, by trade war worries perhaps or fears about rising US interest rates’ effect beyond its shores.

That appetite has certainly been battered this month, with many stock indexes nursing heavy losses as a result (Australia’s ASX is down nearly 10%). The Yen has perhaps gained a modest upper hand over the Dollar, but it probably has not done enough to prevent USD/JPY rising into year end.

It is surely notable that the strong and well-respected daily chart uptrend in place since mid-April remains very much unthreatened by recent trade. While it does a move back to and even above the year’s top makes sense and is worth planning for

After all the US Dollar still enjoys the sort of fundamental interest rate support which Yen bulls have lacked for many years. The Federal Reserve is well-embarked down the policy normalization path, and plans to continue raising rates for as long as the economic data will allow.

Meanwhile the Bank of Japan remains pledged to a policy of extraordinary monetary accommodation until annualized inflation sustainably reaches 2%. September’s print was 1.2%, edging down from August. 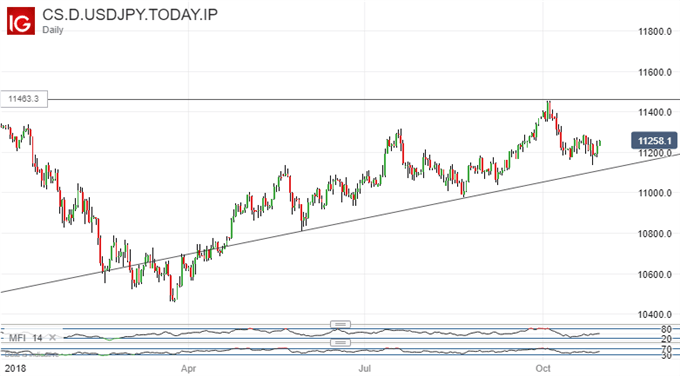 Against this backdrop it is hard to see the Yen making firm gains, unless global risk appetite suffers a catastrophic collapse. Moroever it probably makes sense to be long of USD/JPY into year end, targeting this year’s peak of 114.63

Manageable risk appetite might also make it sensible to be short of other currencies whose central banks are stuck in easing mode, with the Australian and New Zealand Dollars standing out here in the Asia Pacific region.

Obviously a slide below the prevalent daily chart uptrend would make this trade a lot risker, but even that would probably need to be validated by weekly or monthly closes, given that hugely Dollar supportive interest rate prognosis.