NZD/USD Could Slip Well Under This Year’s Lows

New DailyFX Quarterly Forecasts for Q3 and are available here

The New Zealand Dollar’s modest October uptrend against its big US brother has already run into some technical trouble which could see the year’s lows revisited and, very possibly, surpassed before 2018 ends.

The currency has long lacked interest-rate support against the US unit as the Federal Reserve tightens monetary policy while the Reserve Bank of New Zealand keeps its key Official Cash Rate at record lows. Admittedly, these lows are relatively high, at 1.75%, but the Fed Funds target band has now topped them and, with the Fed clearly keen to keep going for as long as the economic data make such a course plausible, the gap in the US Dollar’s favor is sure to yawn wider yet.

Indeed most economists now seem to think that New Zealand rates won’t rise until at least 2020 and maybe not until 2021. Moreover global risk aversion stemming from both trade-war fears and the prospect of a world shorter of US Dollars than it has been,is likely to continue weighing on growth sensitive currency plays like the kiwi.

Added to this is the rise in political risk in Australia, where yet another government finds itself in a parlous state, is likely to spill over from AUD/USD into NZD/USD trade. Indeed such a pattern can be seen on the charts where similarities between the two abound,

So the fundamental backdrop is gloomy and the technical one increasingly reflects this. NZD/USD seems to have topped out at last week’s high of 0.6616. This is significantly below the previous notable peak, which was the 0.6697 set on September 21. 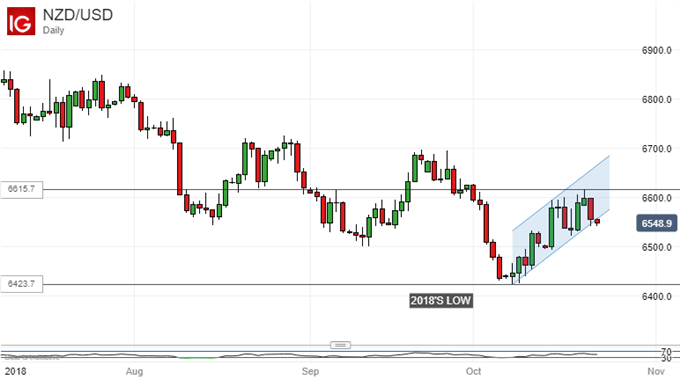 Moreover, recent falls have seen that uptrend channel from early October breached. If the bulls cannot regain it, and that 0.6616 top, then it looks all-too likely that the year’s lows will be revisited. There could be some support there, but give the fundamental backdrop they seem unlikely to last.

A fall below those would put us back to March 2009 and place an uncomfortable spotlight on the post-crisis climb up from the lows of 0.4864 seen since. 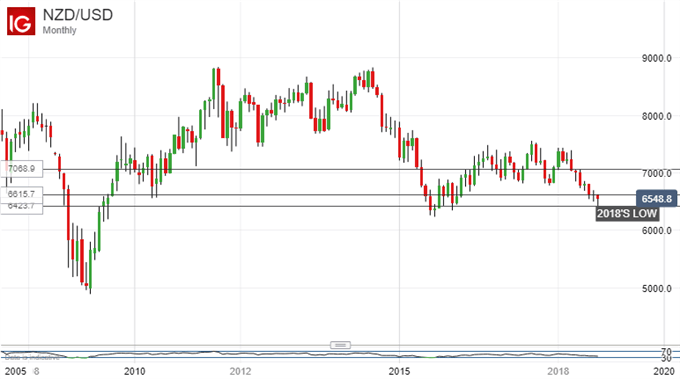 I don’t expect the pair to get anywhere near those lows this year, but a sustained breach of the year’s lows would argue powerfully for further falls nonetheless.

Shorting NZD/USD into year-end would seem to make eminent sense, perhaps with stop loss buy orders in place around the 0.68340 reigon, above which a revival might be in train.