New DailyFX Quarterly Forecasts for Q3 and are available here

The US Dollar has come under a bit of technical pressure against the Japanese Yen in the last couple of weeks, but the fundamentals remain so unarguably in the greenback’s favour that it is hard to see this state of play lasting.

However, USD/JPY weakness has been notable. On its daily chart. the pair has slipped below the long uptrend which had previously been in place since late March. 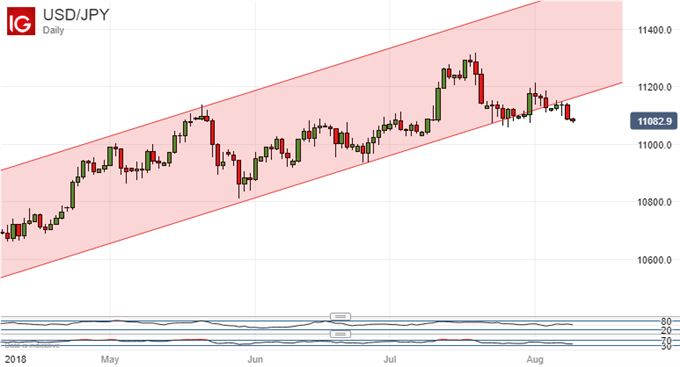 However, this slip has not so far generated heavy significant downside pressure, with the Dollar holding on around recent lows. In any case, interest rate differentials remain as unambiguously in the Dollar’s favor as ever, and possibly more so. Japanese inflation still languishes far below the Bank of Japan’s ‘sustainable 2% target’ making any serious backtracking on extraordinary monetary loosening a distant prospect, if it is visible at all. By gaping contrast the Federal Reserve continues with its bias to raise interest rates for as long as the data make that plan plausible. They still do.

Against such a backdrop it is very hard to see the market selling USD/JPY for very long. A revival in USD/JPY may also see the Yen lose vigor against the likes of the Euro and Australian Dollar too. A bounceback is likely to target recent highs around 112.00 before trying to tackle July’s peaks around 113.00

While a revival is probably assured given those interest-rate differentials, the current correction may of course have further to run. Consider stopping out of a bullish position around 109.94. That would represent the second, 38.2% Fibonacci retracement of the rise up from the lows of March and a slip below that may see selling pressure intensify.

NZD Slips Could Be Worth Buying Against Macro Risk Backdrop

AUD/USD Could Get Fed Boost, But It's Not Likely To Last
Advertisement