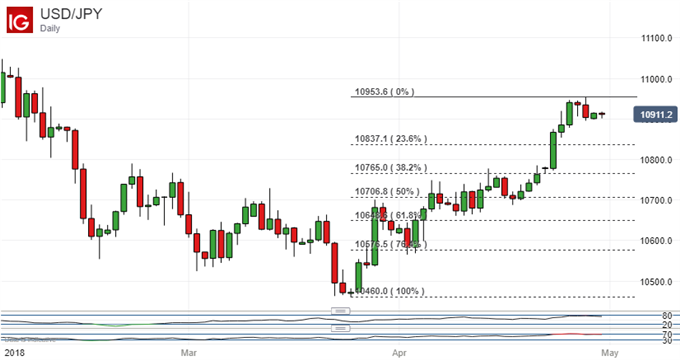 USD/JPY Could Be Vulnerable At Its Heights This Week

The US Dollar has been in the ascendant against the Japanese Yen since March, with USD/JPY’s consistent rise since taking it back to peaks not seen previously since early February.

There are sound enough fundamental reasons for this, with US interest rates still tipped to rise further in 2018 while the Bank of Japan remains in the very thick of monetary easing. There had been speculation earlier this year that an inflation pickup might see the BoJ reverse course, but official commentary since has quieted it and put interest-rate differentials as firmly on the US Dollar’s side as ever.

While the overall trend toward US Dollar strength seems unlikely to fade anytime soon, there could now be scope for some consolidation and perhaps some short-term retracement in the Japanese Yen’s favour. On its daily chart USD/JPY seems to be settling into a modest range below last week’s highs and, if there is a sense that the Dollar bulls have lost a bit of momentum then the pair could slip further.

As long as last week’s peak of 109.54 caps the market, it could be wise to play for a retreat back towards the first Fibonacci retracement of the rise from March to those peaks. That comes in at 108.37 now, with 107.65 lurking below should it break. I do not expect that second level to be challenged but a short trade at market with stops put carefully in place at the peak could be a potential short-term strategy.

US growth decelerated in the first quarter, albeit not as sharply had been expected. But the US Federal Reserve may be more cautious on interest rate rhetoric because of it. This would also argue for a short-term US Dollar bearish trade even if the longer-term trend to the upside endures.

Risks to this trade include the possibility that the Fed remains very upbeat, leaving the markets more certain that rates will still rise multiple times this year. Bad news from other major economies, notably the Eurozone and UK, could also give the Dollar another boost via weakness in their respective home currencies.