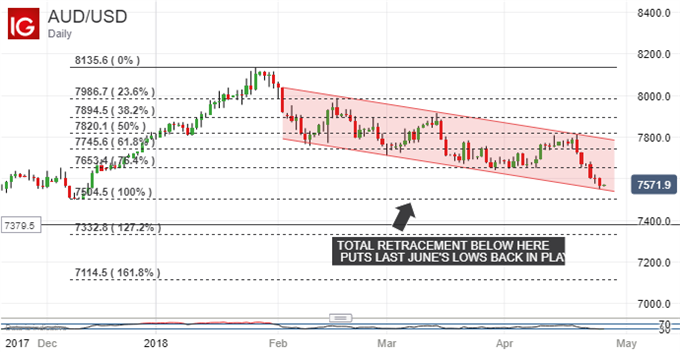 The Australian Dollar has been hammered in the past week against its US cousin, and that hammering has merely been an extension of the long AUD/USD fall which has ruled trade since the highs of January.

A broad resurgence in the US Dollar has been behind part of this weakness, but some of the reasons for it have been Aussie specific and these are the focus of this trade. Australian Consumer Price Index inflation missed its target last week, coming in at 1.9% when forecasters had looked for a 2% gain. The miss was more devastating than it looks, too. An as-forecast rise would have put Australian inflation back in the Reserve Bank of Australia’s 2-3% target band for the first time since January, 2017.

As it was inflation remained just below target, where it’s going to stay for at least another three months until the second quarter’s data are released. Rate-futures’ markets don’t fully price in even a quarter percentage point rise in the Official Cash Rate until June next year. And, don’t forget, the 1.50% record low it’s currently sitting at is already the longest unchanged base rate in Australian history. As things stand it’s thought to have well over a year further to run.

The RBA will make its May policy announcement on Tuesday. It can be expected to stick with old themes by worrying about inflation’s truculent weakness, levels of consumer debt and fretting about the baleful effects of a too-strong currency (not that that is much of a problem these days). If it does, it will be seen to implicitly endorse that futures’ market pricing and the gulf between it and a Federal Reserve still on course to raise rates further will be very stark.

This is likely to undermine AUD/USD still further. At the moment the pair is hovering above 0.7504 which would mark the 100% retracement of its rise up from the lows of last December to the highs of January.

If the RBA doesn’t stand in the way- and it's hard to see that it will- this barrier will probably give way and, if it does so on a daily-closing basis then a slide to the next significant low can be targeted. That’s June 2017’s 0.7379.

Visible fundamental risks to this trade seem fairly slight. Official US GDP numbers could surprise to the downside and spur some US Dollar weakness, which takes the Australian Dollar higher. There could be some consolidation of recent greenback gains in any case. They’ve been quite sharp. But these risks can be mitigated with stop loss buy orders at current market levels.