The Euro may remain vulnerable against the Australian Dollar throughout the second quarter as Europe seeks alternatives to goods that it imports from Russia. Following Russia’s attack on Ukraine earlier this year, the European Union has been implementing steps to increasingly end its reliance on Russian fossil fuels. In the near-term, this may also drive up demand for non-renewable energy.

Outside of energy, the regional bloc also imports wheat and iron ore from Russia. This is where Australia comes into play. The latter is the world’s largest exporter of iron ore and coal briquettes. Australia is also the world’s sixth-largest shipper of wheat. As such, the EU could turn to Australia in the future to help source goods it tends to buy from Russia.

This can boost the Australian economy as it increases exports and generates capital inflows. That can translate into a more hawkish Reserve Bank of Australia (RBA) down the road as the European Central Bank is forced to navigate around the tricky environment it faces.

While RBA Governor Philip Lowe has mentioned that Ukraine is fueling uncertainty on the inflation outlook, the central bank has been adopting a more hawkish stance of late. Markets are now pricing in the first RBA rate hike in June.

On the daily chart, EUR/AUD remains in a downtrend since finding a top in early February. Albeit, recent momentum has been slowing. Immediate resistance is holding around the 38.2% Fibonacci extension at 1.4694. Looking lower, key support seems to be the midpoint at 1.4498 before the current 2022 low at 1.4320 kicks in. 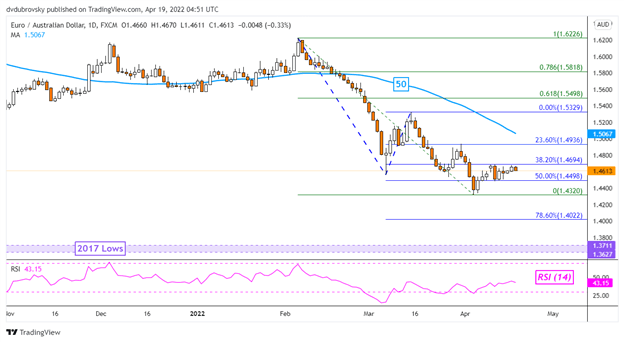 Zooming in on the 4-hour chart reveals a potential Ascending Triangle chart formation that is in the works. A breakout under the rising trendline from early April could open the door to downtrend resumption. On the other hand, pushing higher would expose the late March peak at 1.4942. 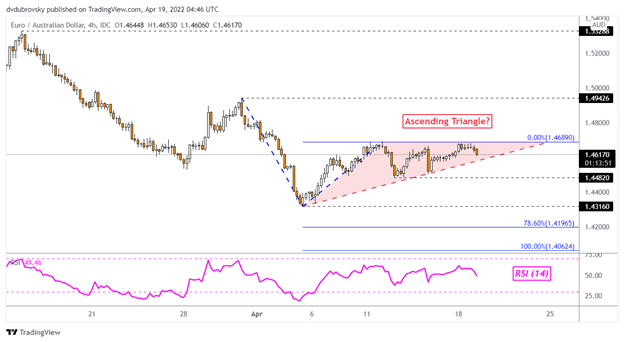 Euro Forecast: EUR/GBP Bounce Still in Focus in the Aftermath of the ECB and BoE
Advertisement