The Euro spent most of its time gaining ground against the haven-linked US Dollar in April. Now, it may be vulnerable to resuming what has been the a broader downtrend since the beginning of January. Historically speaking, the Greenback has tended to strengthen in May when looking back over the past 10 years. Having said that, past performance is not indicative of future results.

EUR/USD has been very closely following spreads between German and United States 10-year government bond yields this year. This reflects expectations of future growth between the world’s largest economy and the Eurozone. Germany is typically seen as the economic powerhouse of the currency bloc, and is often used as a benchmark.

In April, the Euro gained as Treasury rates declined while the equivalent in Germany gained ground. This could be a combination of dovish rhetoric from the Federal Reserve coupled with traders starting to look beyond a slow start to Europe’s vaccination journey. Going forward, sentiment remains fragile to early hints at US tapering, underscored by a simple mention of rate hikes from Treasury Secretary Janet Yellen on Tuesday.

In the long run, I believe more aggressive fiscal policy from the United States and quicker inoculations should leave the Fed in a better position to unwind loose monetary policy sooner compared to the European Central Bank. As such, I am looking to capitalize on what may be a more advantageous scenario for the Greenback against the Euro. A better-than-expected non-farm payrolls report on Friday could bolster this case.

EUR/USD price action seems to be revealing a bearish Head and Shoulders chart pattern. This follows a test of falling resistance from January, maintaining the downside focus. On the 4-hour chart, the 20-period Simple Moving Average (SMA) crossed under the 50-period equivalent. This is known as a ‘Death Cross’ which often carries bearish implications.

Having said that, positive RSI divergence does show that downside momentum is fading. This could precede a turn higher, perhaps back to the moving averages. Those would then come into focus to see if they can reinstate the near-term downside bias. If that is the case, resuming late April’s top exposes the 38.2% Fibonacci retracement at 1.1978.

Under that sits the midpoint at 1.1926 before facing the 61.8% level at 1.1873. Taking these points out may then open the door to perhaps revisiting the late March low for a chance to resume what has been a top in the Euro since January. On the other hand, closing above the April high at 1.2150 would likely overturn recent bearish technical warning signs, clearing a path to February peaks. 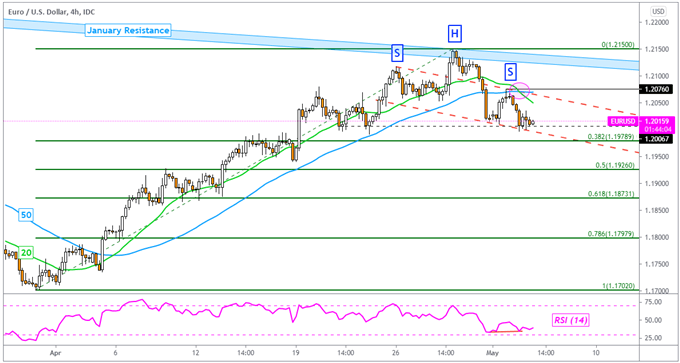