Back in November, I outlined a bearish scenario for the Canadian Dollar against the New Zealand Dollar where the underlying premise was based on rising expectations of easing from the BoC. Weakness on the global economic front amid the US-China trade spat has led to rate cuts from central banks across the world. Yesterday, the Bank of Canada opted to remain on the sidelines, leaving borrowing costs unchanged this year.

That helped spark a rally in the Loonie as the central bank poured cold water on near-term easing expectations. The BoC saw “nascent evidence” that the global economy is stabilizing, highlighting fading recession concerns. Overnight index swaps are now pricing in about a 72 percent chance of a cut by October 2020. Governor Stephen Poloz still mentioned that the largest risk to the outlook remains ongoing trade conflicts however.

This is a stance that is vulnerable to the numerous uncertainties surrounding not just the US-China trade war, but also brewing tensions between the United States, Europe and South America. Rising trade war fears may rekindle speculation that the BoC could cut. Aside from the Fed, it has the most room to do so among the major central banks. This is especially so when comparing it to the RBA and RBNZ, which are already on the easing bandwagon.

As anticipated, NZD/CAD extended its climb after prices broke above key descending resistance from March. After the BoC, the currency pair ended up stalling just under resistance at 0.8691 on the chart below. The medium-term setup seems to favor the upside towards July highs. Keeping the near-term uptrend intact could be a rising support line from October – red line below. In order to resume the dominant downtrend, NZD/CAD will eventually have to take out what it couldn’t do earlier this year – 2015 lows around 0.8246. 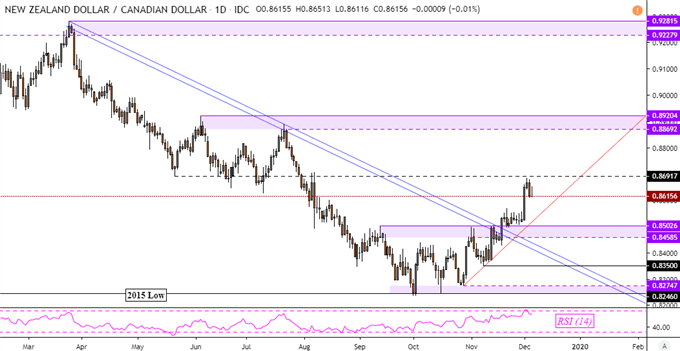 The RBA’s rate hold earlier this week temporarily boosted the Australian Dollar versus the Canadian Dollar. AUD/CAD selling pressure was however rekindled by the BoC. The pair is heading for a rising support line from October. If it holds, we may see a bounce towards key resistance (0.9105 – 0.9144) which would also fall in line with an Ascending Triangle chart pattern. This is typically a bullish formation that could pave the way for a reversal of the downtrend from April to September. 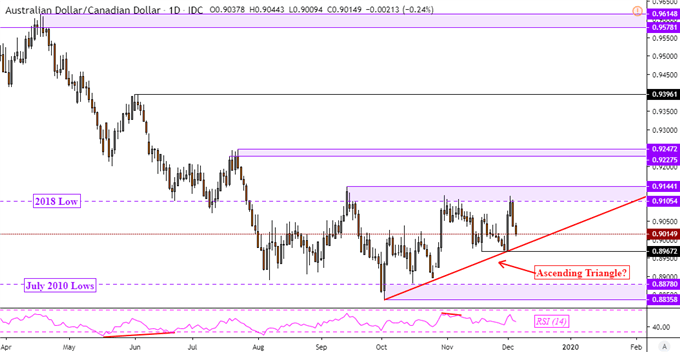 In the event of risk aversion, CAD/JPY could see heightened volatility thanks to the anti-risk status of the Japanese Yen. That may open the door for a break under rising support from August – red lines on the chart below. Recent positive RSI divergence, showing fading downside momentum, preceded the bounce from support at 81.54. Further buying pressure could propel the currency pair towards the October high which like AUD/CAD, would fall in line with a brewing Ascending Triangle. A daily close above 83.55 exposes 84.35. 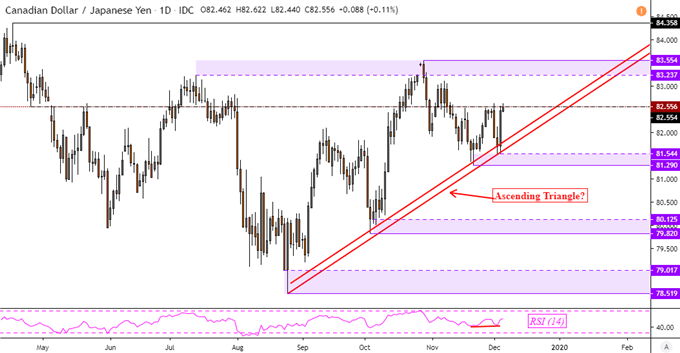