The New Zealand Dollar has been making cautious upside progress against the Canadian Dollar. This is in tandem with a widening yield spread between New Zealand and Canadian 2-year government bonds – see first chart below. In fact, relative to CAD, the sentiment-linked NZD has been paying more attention to differences in rates of return than to risk trends. NZD/CAD’s rise pales in comparison to emerging markets.

This may speak to investors prioritizing returns as they gauge relative dovishness between the Reserve Bank of New Zealand and the Bank of Canada. For most of this year, the latter has had the upper edge. Both central banks started at 1.75 percent at the beginning of 2019. But, the RBNZ cut to 1.00% as its Canadian counterpart boldly stood its ground despite a slowdown in global growth. Could this change?

Based on recent price action, the markets are starting to think so. There is a risk that the US-China trade war escalates as President Donald Trump shows reluctance to commit on key Chinese demands. BoC’s Governor Stephen Poloz may have spent Thursday pouring cold water on rising dovish expectations, but the central bank has increasingly more room to cut rates compared to its New Zealand counterpart.

An escalation in trade wars may put further pressure on these central banks to ease. They have also reiterated their data-dependent approach. Next week, keep a close eye on Canadian GDP due on Friday. We will also receive New Zealand trade data on Tuesday. Looking at the Citi Economic Surprise Index, data outcomes from Canada have been tending to surprise downward as of late. More so than in New Zealand. 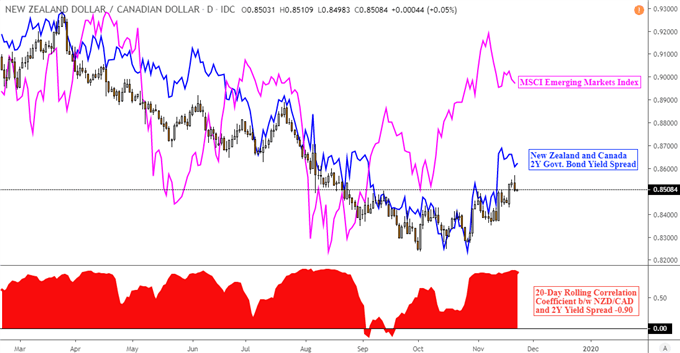 NZD/CAD has also closed above the well-defined falling channel of resistance from March – blue lines below. Further upside confirmation could spell the end of the dominant downtrend. That may take prices towards 0.8692, which is the May swing low. Otherwise, I do not see a resumption of the dominant downtrend until prices can break below the October low, which coincidentally aligns with the 2015 trough at 0.8246. 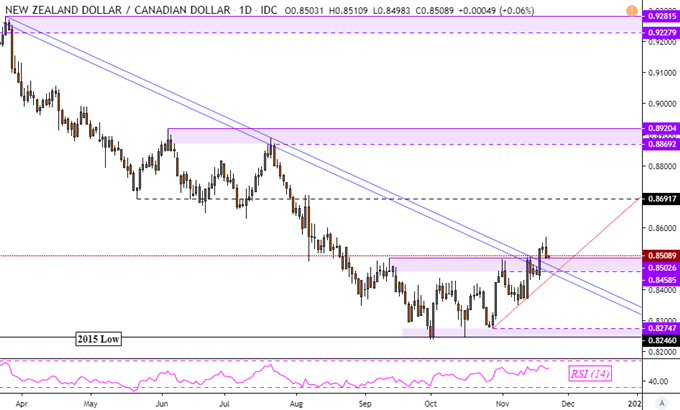