Build confidence in your own AUD/JPY strategy with the help of our free guide!

A currency pair like AUD/JPY often has a close relationship to major global stock indexes, such as the S&P 500. The Australian Dollar typically has a sentiment-linked status while the Japanese Yen an anti-risk one. The former is a currency closely tied to the global business cycle, while the latter a go-to for funding carry trades. Developments in US-China trade talks have thus been a key fundamental driver for AUD/JPY.

Lately, the currency pair has been on the rise alongside a pickup in US-China trade deal bets. As the S&P 500 hit record highs, AUD/JPY has climbed about 7.75 percent since its bottom in August. Now over the past 24 hours, reports crossed the wires that given an interim agreement signing, tariffs against China could begin to be reduced in phases.

2020 Fed rate cut bets have been on the decline and the central bank has made its message clear about hiking. Chair Jerome Powell wants to see a “really significant” rise in inflation before raising rates. With tightening credit conditions appearing to be off the table, that is another fundamental force to support the pickup in market mood and continue the rise in AUD/JPY.

However, given past discrepancies, a guaranteed trade-deal signing between the US and China is anything but certain. This was underpinned when reports soon crossed the wires that a rollback in Chinese tariffs faces fierce internal opposition. With that in mind, there could still be potential for further gains in AUD/JPY. But, the risk remains that gains could be quickly erased should talks collapse.

From a technical standpoint, there are both bearish and bullish formations brewing in AUD/JPY. Starting with the former, a Rising Wedge has been taking shape since the end of August. This is typically a bearish reversal pattern that comes into play after a daily close under the floor of the pattern. That could pave the way for a medium-term decline towards 69.97. 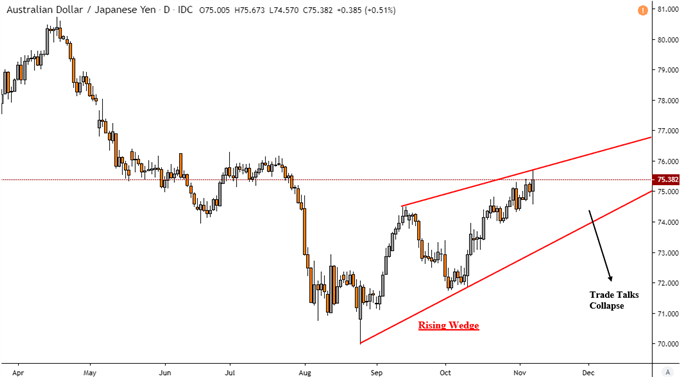 On the flip side, there may be an Ascending Triangle forming from a more long-term perspective. Typically, these act as a continuation of the trend that has taken shape prior to the formation. But, it can at times mark a turning point. In this case, a potential bottom for AUD/JPY should prices manage to close above the highs achieved in June and July. 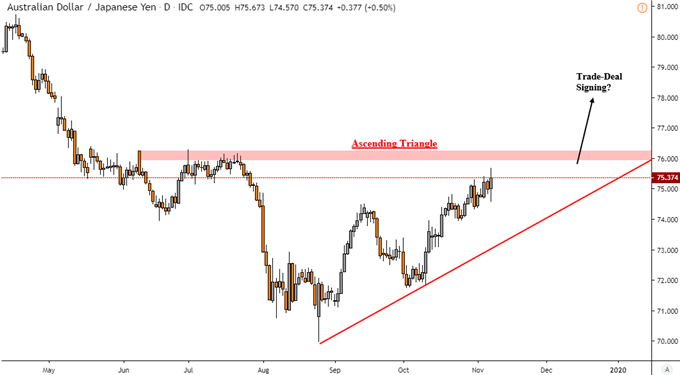 Looking at RSI we do have the presence of negative divergence. This shows that upside momentum is fading and this can precede a turn lower. That may push prices down to the psychological barrier between 74.47 – 73.93. A daily close under this point would pave the way for a test of the floor of the Rising Wedge. At that point, it may become more clear which of the candlestick formations could prevail. 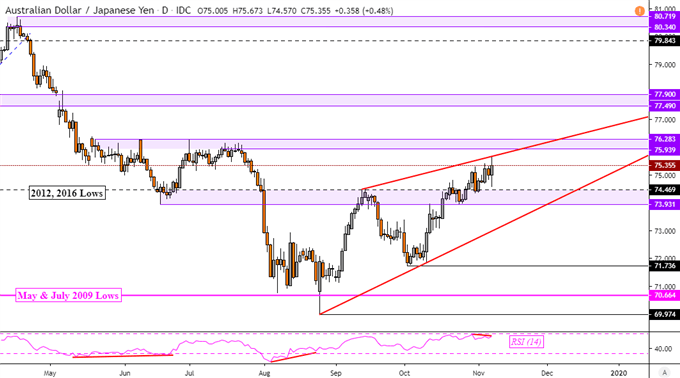