A pickup in the US Dollar from the latter half of last week amidst Italian budget woes offered DXY its longest winning streak on a daily basis (5 days) since August 15th. The greenback appreciated against its major peers. The decline in market mood, particularly from European benchmark stock indexes, offered a second fundamental reason for declines in the ‘pro-risk’ Australian Dollar and more could be ahead.

From a sentiment perspective, there could yet be a chance that the European Commission rejects the budget proposed by Italy’s anti-establishment government heads. This would add momentum to the trading dynamic witnessed in recent days. Meanwhile the appreciation in the US Dollar as the Fed just raised rates in September continues to pressure emerging markets such as India and South Africa.

Developing nations have been facing rising global borrowing costs and oil prices as current account deficits ballooned. Their depreciating currencies makes it more difficult to repay external debt. This has contributed to the MSCI Emerging Markets ETF flirting with bear market territory a couple of times in the past few months. A rocky road ahead for emerging markets, which may sink equities, potentially bodes ill for AUD.

Meanwhile from a yield perspective, the Federal Reserve is expected to continue overtaking its Australian counterpart. One more hike is mostly expected by the end of this year with three more to potentially come in 2019. As for the RBA and judging by their most recent monetary policy announcement, it may only deliver one interest rate hike in 2019. And that is not even fully priced in by the markets.

The Australian Dollar seems to have resumed its dominant downtrend against the US Dollar from February after a bullish reversal pattern failed to offer lasting upside progress. With a descent through a near-term rising support line, AUD/USD may reach the September 11th low at 0.70852 next. Meanwhile, a descending resistance line from September 21st seems to be keeping the pair from heading higher.

Given the fundamental argument and the technical progress in the Australian Dollar, an entry order has been placed to sell AUD/USD at 0.71998 rather than at current prices. This has been done to meet a minimum of a 3-to-1 risk-reward ratio using a daily stop above 0.72381 and a target of 0.70852. A close above the former would also be a break above the near-term descending trend line.

Near-term support is also the December/May 2016 lows between 0.7160 and 0.71452. In the event AUD/USD doesn’t push higher to the entry point, a bounce around this area may offer that opportunity. But the pair could also descend through it. With that in mind, we will be closely watching this trade setup depending on how events unfold. You may follow me on twitter @ddubrovskyFX for updates to the trade. 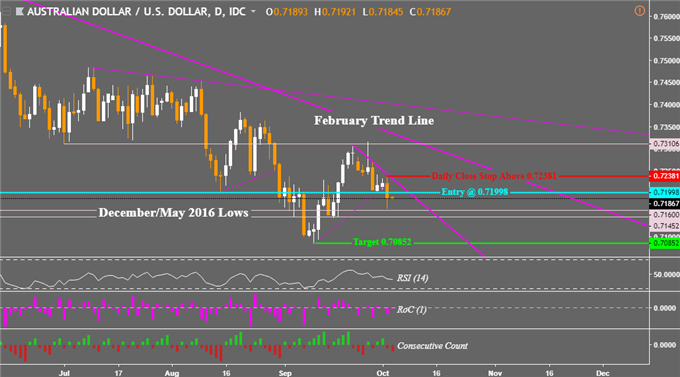