Build confidence in your own AUD/CAD strategy with the help of our free guide!

This dynamic speaks directly to the relative monetary policy stance between the Reserve Bank of Australia and the Bank of Canada. The former sees current rates at an appropriate level for sustainable growth and achieving the inflation target over time. Meanwhile, the latter recently raised rates and alluded to more increases in the near-term.

In addition, Canada is facing higher inflation. June’s CPI report was better than expected. The headline rate clocked in at 2.5% y/y versus 2.3% estimated. As a result, the markets are anticipating a rate hike from the BoC well before the RBA. Overnight index swaps are pricing in a 66.4% chance that the former will increase its benchmark lending rate next in October. The same odds for the RBA don’t cross a better-than-even chance until August 2019.

With that in mind, the fundamental landscape in the medium-term seems to favor the Canadian Dollar against the Australian Dollar but do be aware of some risks. We will get the next RBA interest rate announcement on August 7th. However, given the latest inflation report, the central bank may leave its underlying message unchanged.

Some uncertainties over NAFTA could weigh against CAD temporarily. Canada has last been reported excluded from recent negotiations. But the BoC is focused more so on taming inflation and has proceeded with policy tightening nevertheless. Finally, keep an eye on crude oil prices. A decline in the commodity could weigh against the Canadian Dollar given its importance for the country’s revenue.

Following the soft Australian inflation report, AUD/CAD broke below a near-term rising support line from May. This opens the door for resumption of the dominant downtrend from mid-March to mid-May. With that in mind, this presents an attractive opportunity for a short position. The stop for this setup will be a daily close above the most recent high around 0.96618.

Meanwhile, prices may eventually reach the May low around 0.95533 which would be the target of this short setup. Calculating a risk-reward ratio of at least 2-to-1 reveals an entry point around 0.96256 which was used to short AUD/CAD. Along the way there may be a couple of points where prices could stall. This is the November and December 2017 lows at 0.96122 and 0.95786 respectively. 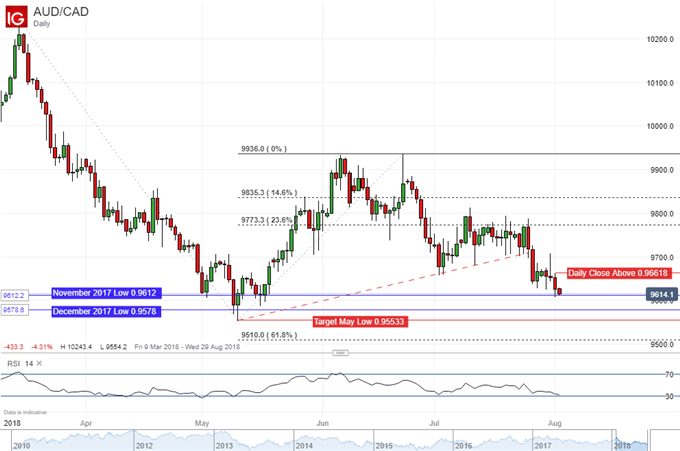