Short EUR/USD After Break Below Support, Targeting May Lows

Lately, the Euro has been consolidation against the US Dollar since the most recent ECB monetary policy announcement. The pair has been oscillating between a high of 1.1852 and a low of 1.1509 over the most month or so. Perhaps the next leg of its journey could be back down to support and this opens the door for a selling opportunity.

Fundamentally speaking, the European Central Bank is more dovish than its US counterpart. At its most recent monetary policy announcement, the ECB did announce an exit to its QE programme with asset purchases to eventually stop by December. However, the central bank is quite patient to begin raising rates thereafter. One could come as early as July 2019 or as late as in the autumn of the same year.

Meanwhile, the Fed is not only on course to deliver one more hike than expected this year, but also an extra one in 2019. This means that the US Dollar, when looking at associated yields, will continue pulling further and further away from its European cousin. The ECB is also facing local economic data that is still tending to underperform relative to economists’ expectations. This could delay a potential hike in 2019 if the trend continues.

Finally, in a situation where sentiment sours and global stocks underperform, the US Dollar could gain some traction given its haven status. This was evident over the past 24 hours when the US pressured China with additional $200b in potential tariffs. More retaliation, from both nations, could have the scope to send benchmark indexes lower around the world. Such an outcome could offer more support to USD.

Looking at the EUR/USD chart below, the pair has broken below a near-term rising support line after failing to get a close above the highs set earlier this week. In addition, the pair also stopped just short of the daily closes set back in mid-June. With that said, the pair could be heading lower in its oscillation back to the May low around 1.1509 next.

This reveals what could be an attractive selling opportunity. The target of this short will be the May low while a stop will be activated on a daily close above 1.1759. To achieve a minimum risk-reward ratio of two to one, 1.1677 was used as the entry point in this setup. The trade will be closely monitored and more exposure may be added if EUR/USD manages to get below 1.1509. 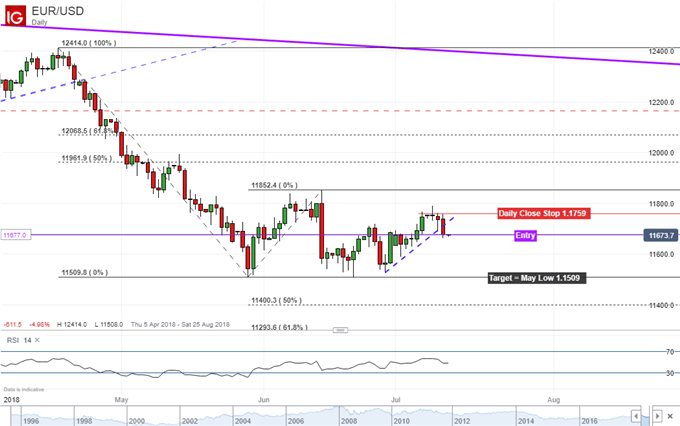