Last time we looked at NZD/CAD, we were interested in bearish opportunities but the technical picture was not at an optimal setting. The pair was in the middle of an uptrend, but it was showing signs of reversing. At one point, the pair was above the February 23rd low around 0.9200 and a close above it would have invalidated the setup. But, that did not happen and now, things are looking more appealing again.

The Reserve Bank of New Zealand, which boasts one of the highest interest rates in the majors spectrum, reiterated much of the status quo at its most recent monetary policy announcement. There, rates were left unchanged at 1.75% as expected. The central bank left the door open to a rate cut, giving it an equally balanced chance when looking at a hike.

When comparing to the Bank of Canada from a monetary policy perspective, it seems relatively hawkish. At their most recent rate decision, the central bank prepared the markets for more rate hikes to come. Since then, Governor Stephen Poloz has said that the economy still warrants higher interest ratesand that business investment still gives him optimism amidst increasing trade war tensions.

As such, the potential for higher rates from Canada sooner than in New Zealand makes for a compelling bearish NZD/CAD argument. However, there are a few risks to this trade. One of which is where oil prices will go. Being a key source of revenue for Canada, lower oil prices can reduce economic growth which has knock-on implications for inflation and thus BoC rate setting.

Speaking of, the next Bank of Canada rate decision is on July 11th and we shall see how much of an extent rising trade war fears impact their outlook. Meanwhile, we will also get second quarter New Zealand CPI data on July 16th. Given that the RBNZ wants to see higher inflation before raising rates, an outcome showing that risks sending the New Zealand Dollar higher against its Canadian counterpart.

A break below near-term rising support (dotted red line on the chart below) with confirmation warns that the downtrend in NZD/CAD from earlier this year appears to be resuming. Leading into the recent dive, negative RSI divergence warned that upside momentum was ebbing. As such, we may soon reach the lows set in May around 0.8814.

From here, the target of this trade will be those lows (around 0.8814) and a stop would be a daily close above 0.9050 (former resistance now support from early May). However, from a risk-reward perspective, an entry order has been placed to short NZD/CAD at 0.8972. This allows for a 2-to-1 risk-reward ratio with wide enough parameters to compensate for large amounts of volatility.

In the event that prices do not hit my optimal entry point, the setup may be adjusted over the coming days depending on how the pair behaves. 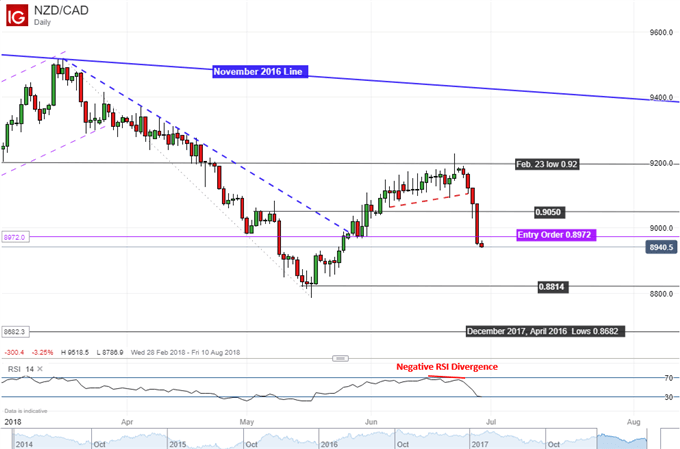