Looking for More Short NZD/CAD Opportunities, One May Come Soon

In April, I built the foundations for a short NZD/CAD trade setup, executed it and booked full profits when prices hit my target. Since then, the pair changed course in mid-May and appears to be heading back to the November 2016 descending resistance line on the weekly chart below. This was accompanied with a morning star bullish reversal pattern which received confirmation afterwards. With that said, I am still closely watching the pair for another opportunity to sell it down the road. 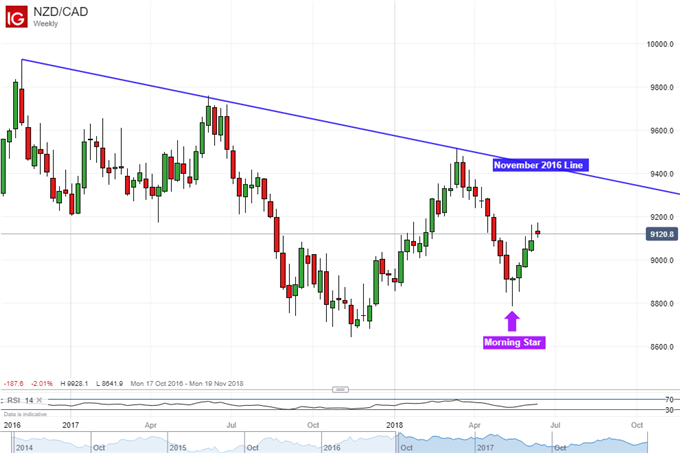 Since I built the foundations for this setup, the fundamental landscape still has not changed dramatically but there have been some updates. As far as the New Zealand Dollar goes, it is still tied to a central bank that is in no rush to adjust monetary policy. In fact, in early May new RBNZ Governor Adrian Orr said that a rate cut is a ‘valid’ possibility.

Meanwhile, the Bank of Canada has other plans. At its interest rate decision on May 30, the central bank paved the way for the next hike by dropping the reference to being ‘cautious’ in regards to monetary policy setting. It replaced it with taking on a more ‘gradual’ approach that will be guided by incoming data. Speaking of, last week the Canadian Dollar rallied in the aftermath of a local jobs report that showed wage growth accelerated more than expected.

This may potentially bode well for headline and core inflation down the road and thus, warranting higher rates perhaps. What is also interesting (and remains a risk to this setup) is the BOC’s relatively hawkish shift despite ongoing negotiations around NAFTA given the weekend G7 leaders summit. There, US President Donald Trump added more uncertainty to the deal as he looks into auto import tariffs.

Nevertheless, from an interest rate perspective, going short NZD/CAD could lead to more long-term setups down the road. For now, the pair remains supported by a near-term rising line from mid-May. Recently though, the emergence of a shooting star bearish reversal pattern does warrant attention. Until there is more confirmation that the pair is heading lower, it is best to stand aside to await a short setup. This is because such a pattern merely indicates indecision.

If the pair intends on heading higher, it faces key resistance levels ahead. The most immediate one is a combination of the early June highs which creates a horizontal channel. A break above that exposes the February 23 low at 0.92. This area has acted as support before and could become new resistance. On the other hand, a push lower will have NZD/CAD facing the 38.2% Fibonacci retracement at 0.9066.

With that in mind, opportunities to sell NZD/CAD will be sought after once there is confirmation of a reversal in the pair’s recent advance. 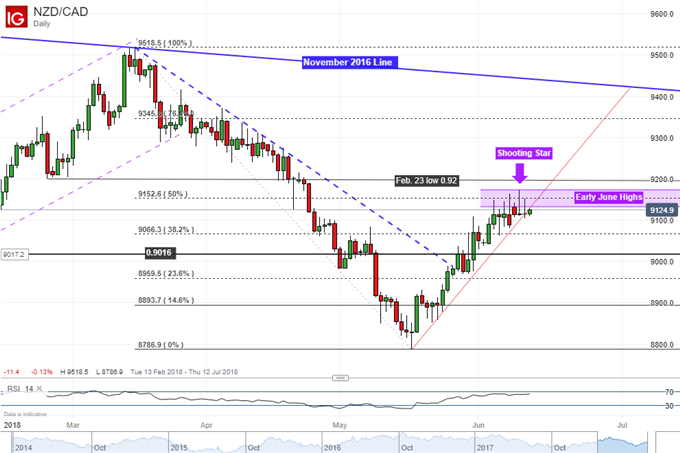