The Australian Dollar has been advancing higher against its New Zealand counterpart over the past couple of months. On the chart below, AUD/NZD tested the 2015 rising support line most recently in April and could be heading higher to 2013 descending channel resistance. There are fundamental reasons that argue the pair may pull this off and presents itself as an attractive long opportunity. 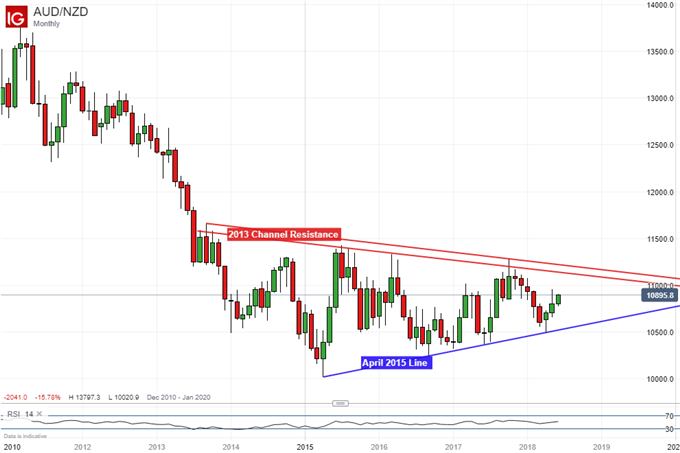 Since April, AUD/NZD’s ascent has been accompanied with a widening spread between 10-year Australian and New Zealand government bond yields. In short, this indicates rising interest rate expectations in the former over the latter. Taking a look at the Reserve Bank of New Zealand’s monetary policy stance can help to explain this behavior.

In May, the RBNZ left rates unchanged and switched to a tone that gives an equally balanced view for policy direction. Then, Governor Adrian Orr reiterated that a rate cut is indeed a ‘valid’ possibility ahead. Compared to the Reserve Bank of Australia, this is a relatively dovish shift. The RBA favors its next move as a hike but is patient to act in the meantime.

Signs that the latter is becoming more eager to raise rates could further send AUD/NZD higher. On June 5th, we got a taste of that when a better-than-expected GDP report fueled RBA rate hike bets. Still, the risk for the pair is that Australia’s central bank downplays those increasingly hawkish bets and remains patient on acting. Signs that the RBNZ is favoring a hike ahead also bodes ill for AUD/NZD bullish bets.

In the meantime, it may be premature to enter long AUD/NZD. Looking at the weekly chart below, the pair remains wedged in-between near-term rising support and descending resistance. Zooming in and looking at the daily chart, we can fine tune a potential trade setup. 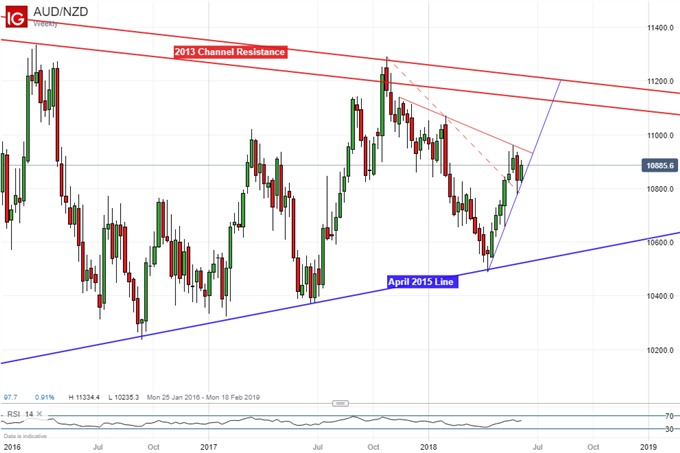 AUD/NZD faces critical resistance ahead which posses as a risk to enter long. This is the May highs between 1.0940 and 1.0959 as well as the descending line going back to mid-November 2017. A break above this area with confirmation would be ideal first before entering long.

In such an instance, the first target for this trade would be the January highs between 1.1057 and 1.1072. Partial or full profit could be taken there before aiming for 2013 channel resistance next. Stops could be placed below the May highs.

In the event that AUD/NZD turns lower, near-term support appears to be the ascending line from early April. A break below that could mean that the pair reverses its ascent over the past couple of months. Confirmation of this could be a push under the June 1st low around 1.0776. 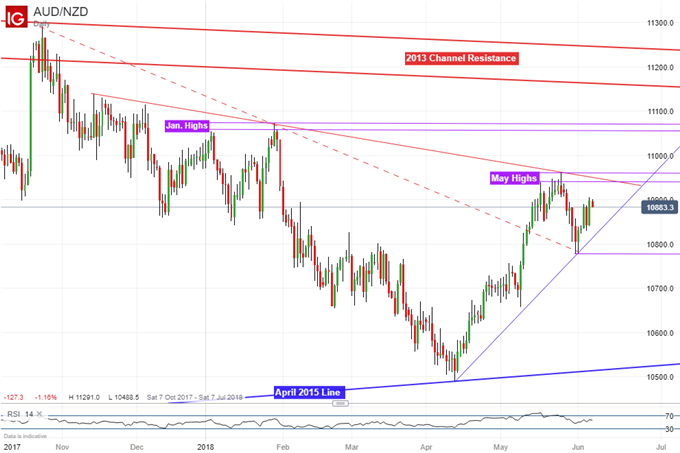