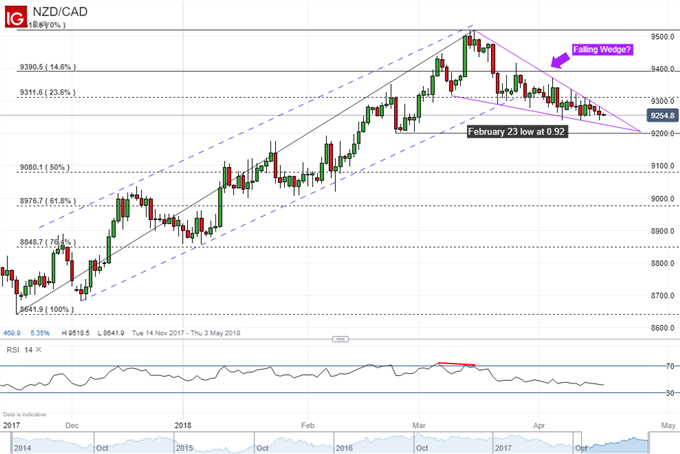 New Zealand Dollar May Fall Against its Canadian Counterpart

The New Zealand Dollar, after putting in an impressive performance against its Canadian counterpart since November, appears to be struggling to make further progress as of late. After breaking below a rising channel, NZD/CAD finds itself in a falling wedge pattern and it is quickly running out of room. Typically, such a pattern warns that continuation of the dominant prior trend is imminent. However, there are fundamental reasons to believe that the pair could fall.

This is because of diverging monetary policy approaches from the Reserve Bank of New Zealand and the Bank of Canada. The former has shown us time and time again that it is in no rush to raise rates at the moment from 1.75%. In fact, overnight index swaps are now pricing in just a 26.6% chance that one RBNZ hike will be upon us by 2019.

Meanwhile, the latter has different plans for Canada’s economy. The BoC has been raising rates since mid-2017 from 0.50 percent to now 1.25 percent amidst higher inflation. The markets expect more this year as the central bank signaled that higher rates may be warranted. Such a scenario means that the spread between rates in Canada and New Zealand is slowly shrinking. In other words, the New Zealand Dollar is slowly losing its yield advantage against its Canadian counterpart.

While it may be tempting to go short NZD/CAD under this reason, it would be best to stand aside at the moment and let a couple of things play out first. We do have the next Bank of Canada monetary policy announcement later this week as well as a local CPI report which may fuel Canadian Dollar volatility. In addition, the presence of a falling wedge in the pair warns against entering short.

With that in mind, I will be looking for NZD/CAD to break below the chart pattern and near-term support. The latter is at 0.92, the February 23rd low. If NZD/CAD pushes higher on the other hand, I will be closely watching the mid-March high around 0.9518. If it struggles there, it may offer another selling opportunity.