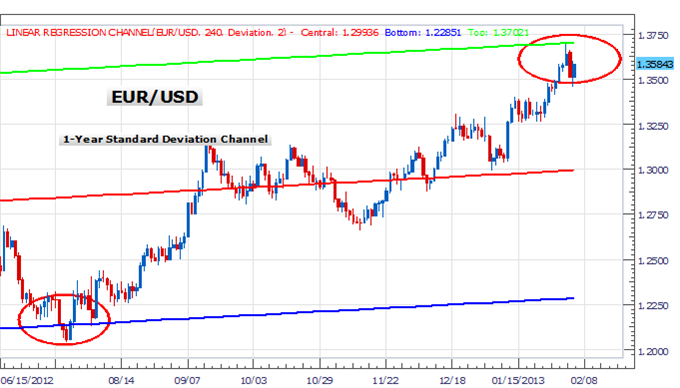 EUR/USD began the week with some much needed volatility as the pair gave back much of last week’s gains in just the first few hours of trading. Follow through weakness on Tuesday was short lived with the euro finding solid demand at the 8-day moving average. Conventional wisdom suggests that the uptrend is already attempting to re-assert itself with a test of last-week’s 1.3712 high soon to follow. We are not so sure.

Friday’s failure in the euro came just above the top end of the 1-year standard deviation channel. For those not familiar, the top of this channel just denotes the 2nd standard deviation from the 1-year linear regression line and is a level from a statistical standpoint that should contain price action in the pair 95% of the time. However, statistics are statistics and markets are markets. From a practical trading standpoint the top of the standard channel is just a possible inflection point of significance where a broader counter trend move has a higher probability of materializing.

If a broader correction is indeed materializing in the euro then we would expect the price action over the next few sessions to mimic the action seen in late July/early August when the pair reversed from the bottom of its 1-year standard deviation channel. At that time, several tests of the channel were seen before the single currency finally moved materially higher. Any forthcoming re-tests of the top of the channel should prove strong resistance if a broader correction process is indeed about to commence.

One possible catalyst for euro weakness in the days ahead is the ECB February policy meeting and press conference on Thursday. With the euro having rallied more than 5 big figures since the January meeting, market participants are likely to be nervous that such aggressive strength will prompt a policy response from the ECB or at a minimum dovish jawboning from Mario Draghi in the press conference that follows.

STRATEGY – SELL EUR/USD ON A RALLY

*After Entry Move Stop to Breakeven on a Decline Under 1.3640