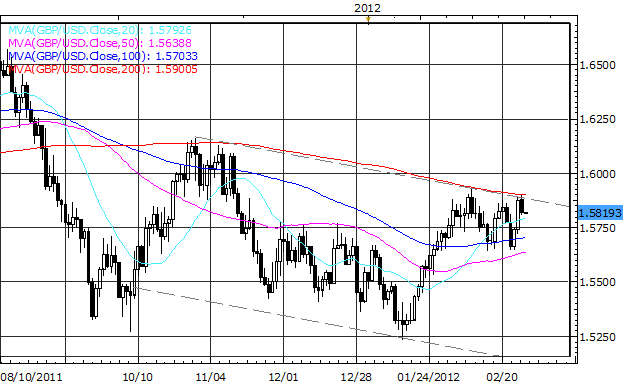 Short GBPUSD on Test of 200-DMA

The British Pound has been constrained by a long-term descending channel that has been in place since mid-October. While some may argue that another leg of risk-appetite and thus U.S. Dollar weakness is due, the Sterling’s strength over the past few weeks warrants a pullback, at least of minor magnitude. This first such opportunity to swing trade the pair lower came on Friday, when the GBPUSD hit significant resistance in the form of a descending trendline off of the October and February highs, when the pair traded as high as 1.5898. As per my analyst pick from last week, a short trade was suggested at 1.5895 to take advantage of another pullback by the pair to its 100-DMA at 1.5700. In consideration of the economic calendar this week, little stands in the way of a corrective move lower by the cable.

The chart above illustrates the approximate 750-pip descending channel that has been in place since mid-October. The most recent test of the Range Top occurred on Friday, after a test on February 8. The GBPUSD’s inability to close above the 200-DMA suggest a break back to the 100-DMA in the coming days. The GBPUSD has been trading within this tighter range since January 26. 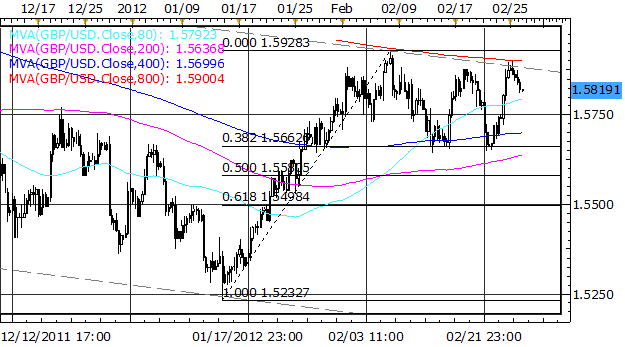 The chart above (6-hour timeframe) shows the Fibonacci retracement levels for the GBPUSD, and what is expected out of the GBPUSD in the coming days, with our bias in favor of U.S. Dollar strength and British Pound weakness. The pair currently trades above is 20-DMA at 1.5792.

Trading Tip – On its two most recent advances towards the 200-DMA at 1.5900, the GBPUSD failed to produce substantial headway. In fact, the 200-DMA was never breached – a sign that strong resistance indeed lies ahead. As such, our bias to the downside exists predicated on the notion that the pair has held in between its 100-DMA and 200-DMA for the past month. While we do expect the 200-DMA to break – in particular on the back of a strong move higher by the EURUSD - a near-term pullback is expected first.

Little headline event risk lingers on the docket, with U.S. durable goods orders on Tuesday offering the most significant piece of data due from either side of the pond. Of interest is the second reading of fourth quarter American growth, though with current forecasts in line with the original reading, it would take a miss on either side of the expected print to stoke significant volatility.

United Kingdom – Is the British economy improving? Perhaps, and data this week will show both sides of the coin. On Wednesday, both a consumer confidence survey and a monthly reading of consumer credit are expected to show signs of improvement. On Thursday, the PMI manufacturing survey is forecasted to show a slight dip in production, a suggestion that manufacturing activity continues to grow, just at a trimmed pace.

United States – Manufacturing activity is improving in the United States, though the data due this week doesn’t necessarily support that conclusion. On Tuesday, durable goods orders, the report which tracks goods with a lifespan of three years or more, is forecasted to show a slight pullback in January. This will be followed by the consumer confidence reading for February, which, despite its optimistic forecast, could see a slightly dampened figure on the back of higher oil prices. If oil remains elevated, look for President Barack Obama to announce an initiative with the strategic petroleum reserve, which could ease prices at the pump and boost confidence in the coming periods.

USDOLLAR Index: What Will Break It Free? We Don’t Know, Just Go with the Flow

AUDNZD: Away from the Eye of the Storm, Converging Towards a Break

EURUSD: Range Within a Range
Advertisement