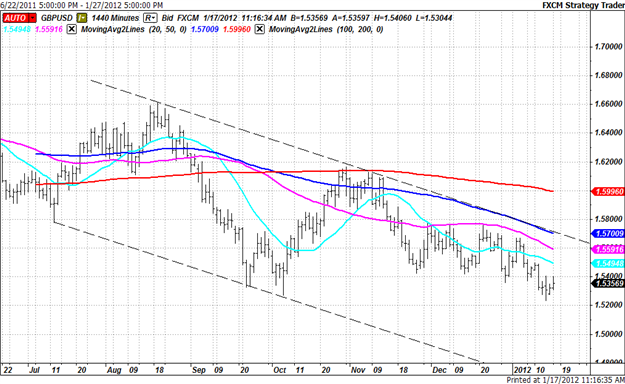 While the British Pound isn't directly tied to global risk trends as, say, the Australian Dollar is, it is influenced heavily by the events on the ground in Europe. The recent wave of ratings downgrades by Standard and Poor’s suggests that the situation in the Euro-zone is getting worse in spite of numerous efforts by politicians to reign in the debt crisis. Removing the debt crisis from the picture, the GBP/USD would still be under pressure, given the condition of the British economy. The current stagflating state of the British economy has eroded the Sterling’s purchasing power relative to the U.S. Dollar, and considering policy options available to simultaneously stoke growth while containing inflation, our fundamental outlook for the British Pound is necessarily lower against the U.S. Dollar.

This trade, however, is one that has been on the table for quite some time; in fact, it was first recommended back in late-October. Unfortunately, our first attempt at this short proved futile, as the rally away from the U.S. Dollar on the October 27 Euro-zone summit pushed the GBP/USD back above 1.6050, the Stop on that particular trade. The most recent effort to short the GBP/USD has proved fruitful thus far, and given the technical sentiment surrounding the pair, although a bounce cannot be ruled in the short-term, the medium- and long-term pictures do not offer sound prospects for a break of the descending channel that has been in place over the past six months.

The chart above illustrates the approximate 1100-pip descending channel that has been in place since mid-July. The most recent test of the Range Top occurred back in early November, and there has not been much pressure to the upside with advances stemmed by the 50-DMA to the upside. The Sterling’s inability to find technical momentum to close above said level coupled with the deteriorating British economy are near-term impediments to the GBP/USD from climbing higher. 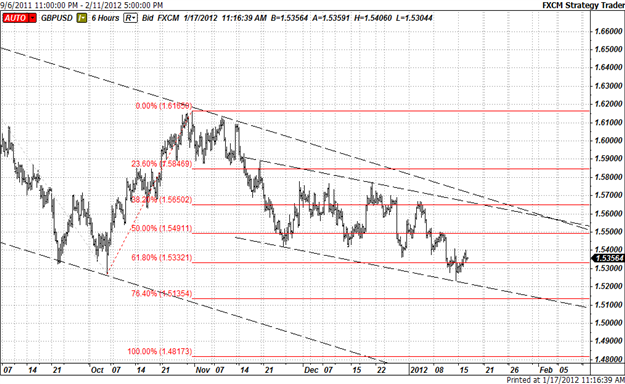 The chart above (6-hour timeframe) shows the Fibonacci extension levels for the GBP/USD, and what is expected out of the GBP/USD in the coming weeks, with our bias in favor of U.S. Dollar strength and British Pound weakness. The pair currently trades between its 50.0 and 61.8 Fibonacci extension levels, from 1.5491 to 1.5332, respectively, from the August 19 high at 1.6617 to the October 6 low at 1.5270, with the extension drawn to the October 31 high at 1.6165.

Trading Tip – Even on its most recent advance higher – the rally from the last week of December through January 4 – the pair was unable to climb above the key 60.0 RSI level. Typically, during an extended downtrend, the 60 level serves as resistance on longer-term charts. Accordingly, after putting in some slight bullish RSI divergence on the 6-hour chart last week, the rally to the upside is warranted. Overall, however, the downtrend is still in place, with the short-term moving averages (20, 50) trending well-below the long-term moving averages (100, 200) on the daily chart. With the Range Top at 1.5700 coinciding with the 100-DMA, some significant resistance to the upside is in place. If the pair is to rally, I suggest selling additional GBP/USD as close to the 1.5700 level as possible, as the U.S. Dollar’s retracement may soon be over. It is worth noting that a less steep, more gradual and narrower descending channel has been in place since mid-November; this channel’s Range Top comes in at 1.5650.

The most important events on the docket come tomorrow and Thursday, which arguably have the densest composition of market moving events on the week. Labor market data for the United Kingdom is due on Wednesday, while U.S. industrial production data for December comes in just before trading opens in New York. On Thursday, two days after the British consumer price index was released, the American consumer price index is due. The U.S. CPI reading is arguably the most important event on the calendar for the GBP/USD, given its implications for more quantitative easing by the Federal Reserve.

United Kingdom – The British economy continues to stagflate, and the data due the rest of this week is supportive of such a notion. Primarily, the labor market reading due on January 18 looks to suggest that the unemployment rate remains high and joblessness persists despite efforts by the government to buck the trend. As more evidence emerges of a recessing British economy, the Bank of England is likely to unveil another massive bond purchase program, one that should dampen demand for Sterling as the money supply is expanded.

United States – According to a Bloomberg News survey, economists forecast the U.S. consumer price index to moderate, with the median estimate calling for a slight 0.1 percent bump in December, on a monthly basis. The year-over-year figure is expected to drop to 3.0 percent from 3.4 percent in November. The core figure, which excludes the more volatile food and energy components, is forecasted to hold at 2.2 percent on a yearly-basis. Considering this figure has been subdued relative to the headline figure, Federal Reserve Chairman Ben Bernanke has suggested that inflation remains “transitory,” leaving open the door to further quantitative easing.

USDOLLAR Index: What Will Break It Free? We Don’t Know, Just Go with the Flow

AUDNZD: Away from the Eye of the Storm, Converging Towards a Break

EURUSD: Range Within a Range
Advertisement