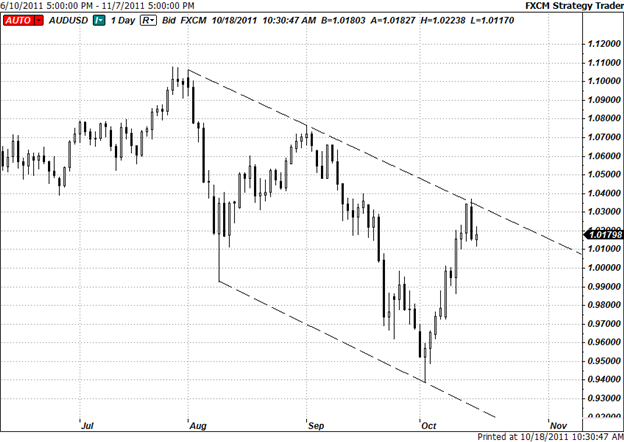 The Aussie-Dollar pair has been exceptionally volatile the past few months, though as a carry trade, this would be expected in tumultuous trading conditions. Nonetheless, despite these swings – the AUD/USD just finished a 1000-pip move in less than two-weeks – a descending channel has been carved out since August 1. For the AUD/USD to move back towards its Range Bottom, there will need to be another fallout in equity markets, provoked by concerns that Euro-zone leaders won’t have done enough to contain a liquidity crisis from spreading from Europe to the rest of the world’s advanced economies.

Given recent commentary from the German leadership block – Chancellor Angela Merkel’s spokesman noted that while a “package” of measures would be agreed upon at the European Union summit in Brussels on October 23, but also said that “the chancellor reminds [everyone] that the dreams that are emerging again, that on Monday everything will be resolved and everything will be over, will again not be fulfilled" – it appears that European leaders are starting to come to this realization. This, coupled with the fact that the Reserve Bank of Australia was exceptionally dovish in its recent minutes, falling short of everything but calling for a rate cut at the next policy meeting, paints a scenario in which appetite for higher yielding currencies will be diminished in the coming weeks. As such, on confirmation that the pair is indeed in its next leg lower, a short opportunity has presented itself to range trade AUD/USD back towards its October low at 0.9386.

The chart above details the descending channel that has materialized over the past few months on a daily timeframe. The most recent test of the Range Top proved fruitless, with no breakout occurring and thus priming the pair for another test of its Range Bottom. Nevertheless, given the volatility of the AUD/USD, the strategy is to remain on the sideline until there is a definitive break lower. Given the nearly 1000-pip range the pair is currently trading in, we’re looking towards the middle of the range for our short entry point. 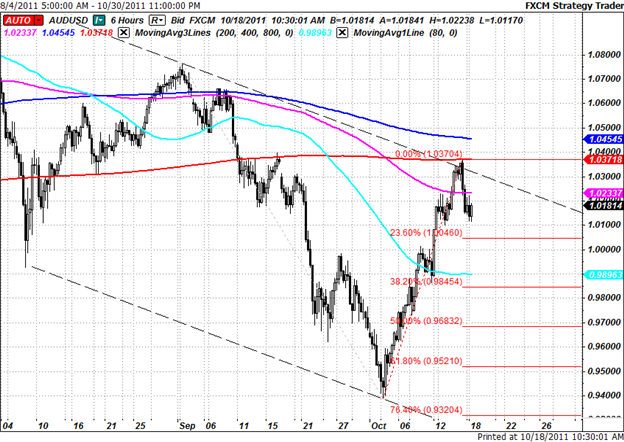 The chart above (6-hour timeframe) shows the Fibonacci extension levels for the AUD/USD, and what is expected out of the AUD/USD in the coming weeks, with our bias in favor of U.S. Dollar strength and Australian Dollar weakness. The pair currently trades between its 0.0 and 23.6 Fibonacci extension levels, from 1.0370 to 1.0046, respectively, from the August 1 high at 1.0763 to the October 4 low at 0.9386, to the October 17 extension at 1.0370.

Trading Tip – Despite the recent rally by the AUD/USD, it remains entrenched in a descending channel that has formed over the past eleven weeks, and the main technical indicators this piece uses points to losses on the horizon. First, in regards to the recent rally, a correction was long overdue. On October 4, the low for the AUD/USD, the daily RSI was oversold, at 29. Even after the rally, the daily RSI yields two key results. First, the daily RSI remains capped by the 60 level, currently at 55; in a bear market, the RSI often fails to break above the 50 to 60 area. Second, there is RSI divergence. What this means is that the RSI moves differently than the currency on the price chart: in this case, the RSI has topped in the 60 area, while the AUD/USD has made a lower low. This suggests that the rally may be over. Likewise, the MACD Histogram suggests the AUD/USD may be turning as well, with the differential down to +78 from +85 on Friday. Finally, the Slow Stochastic oscillator issued a sell signal yesterday, with the %K less than the %D, at 86 and 91, respectively. Considering the indicators are turning in tandem again – the last time was at the bottom on October 4 – it appears the next leg lower for the AUD/USD is beginning.

Event Risk for Australia and the United States

There is not much by way of significant data out of Australia for the remainder of the week, though there is a good deal of data out of the United States that could shape risk-appetite. Price data for both consumers and producers are due this week (the figure for producers was alarming, with the PPI in September at 6.9 percent year-over-year) as well as housing sector data. Accordingly, signs of a revival in the housing market could alleviate recession concerns for the United States, thus weighing on the Greenback; signs of further deteriorating could stoke more concerns about slowed growth in the world’s largest economy, diminishing appetite for higher yielding assets like the Aussie.

In totality, while the event risk posed this week will not push the AUD/USD to the entry target by itself, a deteriorating economic environment with rising price pressures in the United States favors U.S. Dollar strength and Australian Dollar weakness in the medium-term. As such, the notable releases on the docket over the next few days will be used as guidance as to when to expect the AUD/USD to reach the proposed entry point.

Australia – Aside from the Reserve Bank of Australia’s Board minutes which were released early in Asian trading on Tuesday, there exists little by way of scheduled event risk for the carry currency. That being said, the Euro-zone debt crisis and concerns over slowed global growth with guide the Australian Dollar in the coming days.

United States – While there are numerous data releases over the coming two days that will spark price action in Dollar-based pairs, there are two key releases to take note of.According to a Bloomberg News survey, economists forecast U.S. consumer price index tocontinue to show signs of pressure, with the median estimate calling for a 0.3 percent gain in September, on a monthly basis. Year-over-year, the index is expected to show that price pressures held at 3.8 percent in October, the same level in August. The objective of the Federal Reserve’s quantitative easing stimulus program was to achieve a target inflation rate of about 2 percent. If price pressures continue to increase, this could provide evidence for hawkish Federal Reserve officials to resist calls for further easing and instead continue solely with ‘Operation Twist.’

The other important release for the week would be the Federal Reserve’s Beige Book Economic Survey, which is released monthly. Thedocument summarizes comments received from businesses and other contacts outside the Federal Reserve and is not a commentary on the views of Federal Reserve officials. Accordingly, as the survey policymakers examine as a health survey of their districts, given recent concerns of a recession in the United States, the Beige Book could give guidance on growth expectations in the coming weeks.