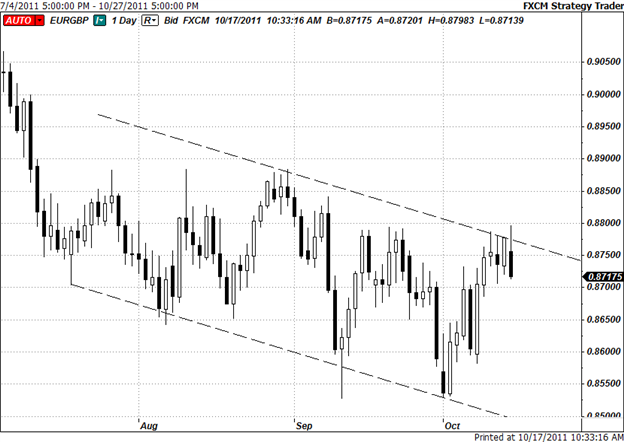 Short EUR/GBP on Break Below 20-DMA

The Euro-Sterling pair has been trading to the downside for the better part of the past three-plus-months, playing into a neat range-bound channel. Much of this has been centered on Euro-zone fundamentals, more so than British fundamentals. In fact, since July 1, the weekend that the Greek parliament finalized the terms of their bailout following rounds of votes earlier in the week, the Sterling has been one of the strongest performing currencies against the Euro, only behind the Japanese Yen and the U.S. Dollar, respectively.

Euro-zone fears are arising once more, especially after developments over the weekend out of Paris. German Chancellor Angela Merkel’s spokesman noted that while a “package” of measures would be agreed upon at the European Union summit in Brussels on October 23, but also said that “the chancellor reminds [everyone] that the dreams that are emerging again, that on Monday everything will be resolved and everything will be over, will again not be fulfilled." Price action on Monday has showed that the Sterling is favored more heavily than the Euro, and considering my bias has been towards a limited solution out of Europe, Chancellor Merkel’s commentary strengthens my position. Therefore, on continued uncertainty out of Europe, the EUR/GBP appears to be poised to test its Range Bottom should it break the 20-DMA and then a Double Bottom set at the September and October lows.

The chart above details the descending channel that has materialized over the past few months on a daily timeframe. The most recent test of the Range Top proved fruitless, with no breakout occurring and thus priming the pair for another test of its Range Bottom. The next two levels of resistance to the upside have been established: first the Double/Triple Top set in the 0.8780/95 zone based on the mid-September and mid-October highs; and second the Range Top near 0.8740 later this week or next. Similarly, the range indicates support: first with the September and October lows indicating a Double Bottom in place in the 0.8520/30 area; and second the Range Bottom near 0.8465 later this week or next. 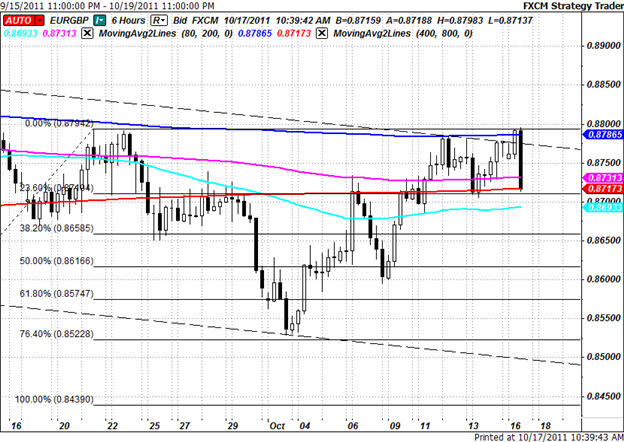 Trading Tip – The EUR/GBP remains biased to the downside despite the recent rally to the Range Top, and the shift in the short-term technical structure suggests the breakdown may be beginning, triggered by disappointing fundamental developments in regards to the Euro-zone debt crisis. The daily RSI remains capped by the 60 level, currently at 51; in a bear market, the RSI often fails to break above the 50 to 60 area. The daily RSI has not moved above this zone since July 4. The 6-hour chart confirms that the turn may be starting too. The MACD Histogram has diverged bearishly, with the differential at -4.9 as per the most period close. Likewise, the Slow Stochastic oscillator, while having just issued a sell signal on the daily chart, already points to further losses on the 60hour chart, with the %K less than the %D, at 45.9 and 64.9, respectively. While the 200-DMA (0.8718) has provided support, a break below said level exposes the weaker 20-DMA (0.8693), a level once breached should clear way towards the Range Bottom.

There is significant data out of both the Euro-zone and the United Kingdom this week, with the German ZEW Survey and the Bank of England minutes headlining event risk for the EUR/GBP. The primary fundamental driver for the EUR/GBP, as well as global financial markets and risk-appetite on the whole, remains the Euro-zone debt crisis. Positive developments will boost the EUR/GBP while continued uncertainty will weigh on the pair.

Euro-zone – Aside from the Euro-zone debt crisis, which will crescendo into the summit on October 23, gauges of confidence in the market will guide Euro-based pairs in the coming days. The first such survey is released on Tuesday, October 18, when the ZEW surveys from the Euro-zone and Germany are released. Economic sentiment for Germany, the most important of the ZEW surveys, is forecasted to show a continued deterioration in confidence in the economy, suggesting that the Euro-zone debt crisis continues to weigh despite promises of a resolution. Accordingly, as the data is priced into the Euro, and in accordance with our bias, we’re looking for a worse-than-expected reading to dampen the appeal of the Euro against the Sterling.

United Kingdom – There are two key events in the coming days for the British Pound, both occurring before or on Wednesday. On Tuesday, the consumer price index for September will be released. It’s clear that the continued period of low interest rates employed by the Bank of England has certainly allowed inflationary pressures to move in on the British economy, with the consumer price index forecasted to show price pressures at 4.9 percent in September.However, the Sterling is unlikely to find bids on the higher rate of inflation as rate expectations are completely suppressed.

On Wednesday, the Bank of England minutes will be released for the central bank’s most recent meeting. On October 6, the Bank of England voted to maintain the key interest rate at 0.5 percent, while the Monetary Policy Committee boosted the target of its bond program to £275 billion from £200 billion. This move is evidence that the Bank of England’s Monetary Policy Committee is focused on economic growth rather than reducing inflation. The minutes of the meeting will be published on October 19 and will include highlights of the board meeting as well as forecasts of future growth for the country. The key information will be the Bank of England’s decision in regards to expanding its asset purchase program. If further measures of quantitative easing are likely, the magnitude of the projected EUR/GBP move to the downside will be capped.