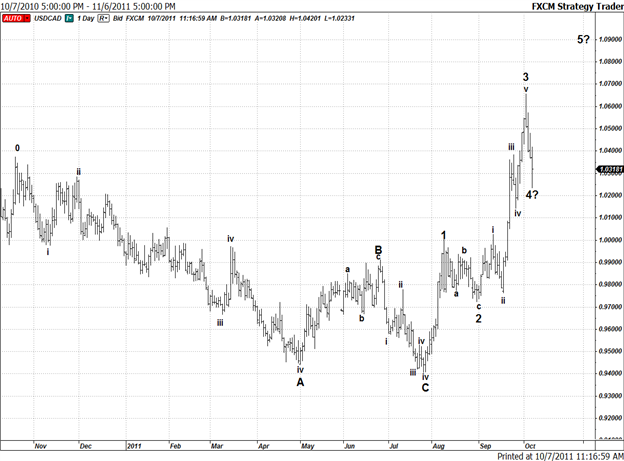 Long USD/CAD as Correction Appears to be Complete

The USD/CAD has arguably had one of the most volatile rides the since the end of July. After falling to 0.9405 in late July, the pair’s lowest exchange rate since November 2007, the USD/CAD has moved essentially vertically towards fresh 2011 highs. In the last three-weeks alone, the USD/CAD has traded under 0.9800 and just over 1.0650 – a remarkable 850-pip range. This kind of volatility is rare in FX markets; price action exhibited on a weekly or even daily basis was unseen across months at a time, years ago.

This type of trading environment provides immense opportunity – but also immense risk. Markets have shown that they will turn without prior warning, considering fundamentals are playing little role in what drives price action. Instead, price action has shown us that markets are trading on psychology – fear. Accordingly, while it is not my normal analysis to utilize Elliott Waves, given the dramatic shift to trading on psychology, I believe using Elliott Waves in the current environment is best suitable for technical analysis.

On the daily chart above, there are two waves outlined, from left to right: the corrective wave and the motive impulse wave. Considering current price action, it appears that a five wave impulse is unfolding, from starting point C (the end of the corrective wave). The first four waves (labeled 1, 2, 3 and 4) also look to have completed, given the nature of the corrective waves 2 and 4. In impulse waves, waves 2 and 4 nearly always alternate in form; wave 2 appears to have been an expanding flat (noted a, b and c), leading to the conclusion that wave 4 would need to be a zigzag. 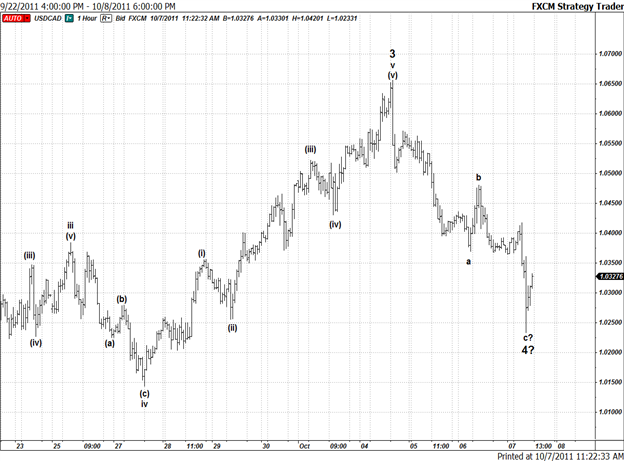 Taking a closer look at price action, it’s been noted that there are interesting developments on lesser degrees. Primarily, that wave 3 had two extensions: in sub-wave iii and sub-wave v. This also appears to be the correct count, given the fact that sub-wave iii unfolded into five waves, wave iv was a corrective zigzag, and wave v unfolded in five waves as well. The termination of wave 3 also denoted the termination of sub-wave v and (v).

Given the recent sharp pullback, denoted by violent appreciations and depreciations, wave 4 appears to be a zigzag. As noted earlier, corrective waves 2 and 4 often taken alternate forms: wave 2 was an expanding flat, so wave 4 would thus be a zigzag. A zigzag in a bear market would exhibit the pattern seen above (in wave 4: a, b and c) in such that sub-wave c terminates below sub-wave a.

Accordingly, this leads to the conclusion that we’re headed higher. This makes sense beyond the USD/CAD: a sharp rally in risk-correlated assets this week (which the Canadian Dollar is a part of) appears to be reaching an exhaustion phase, but moreover, given broader macroeconomic concerns, the U.S. Dollar looks to strengthen on liquidity concerns in Europe. It’s plausible that we see a move higher followed by a bounce lower, but thereafter the goal remain above this week’s high just above 1.0650.