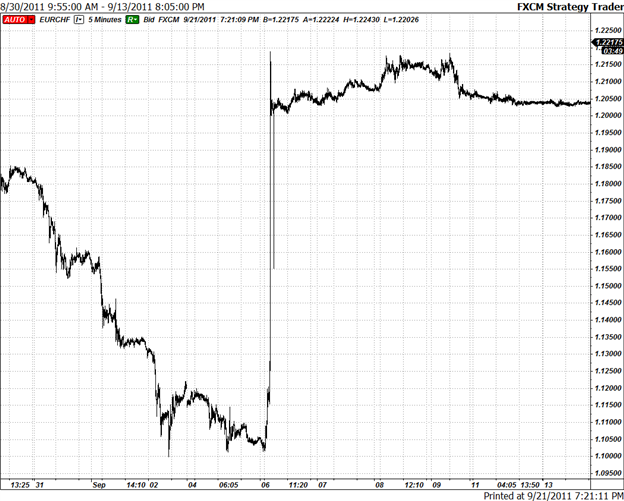 Today’s strength exhibited by the U.S. Dollar led to a sharp depreciation by the Euro. The collective markets’ intention behind this move is clear: the Federal Reserve’s current policy dictates no expansion of the balance sheet, which would have led to a further depreciation of the U.S. Dollar against its peers. With a Greek default looming, a credit event that would dry up European liquidity, there exists a necessity for safety. Over the past year-plus, this role has been filled by the Swiss Franc, a fiat currency landlocked in the heart of Europe.

While foreign investors reaped the benefits of the rapidly appreciating Franc, domestic exporters suffered greatly. The result, in response to a deteriorating economy, was the implementation of a currency floor against the Euro. Currently, with the floor at 1.2000, and the EUR/CHF trading below 1.2240, the Swiss National Bank has little reason to raise the floor again, considering markets haven’t tested the 1.2000 level with any semblance of conviction. On the other hand, reports have surfaced that the Swiss National Bank is preparing for a move, so it’s best to prepare for the volatile price action.

The above chart is included to illustrate just how quickly the intervention move higher by the EUR/CHF could occur. On September 6, when the Swiss National Bank announced they would impose a currency floor at the 1.2000 exchange rate, the EUR/CHF jumped over 1000-pips in a matter of minutes. 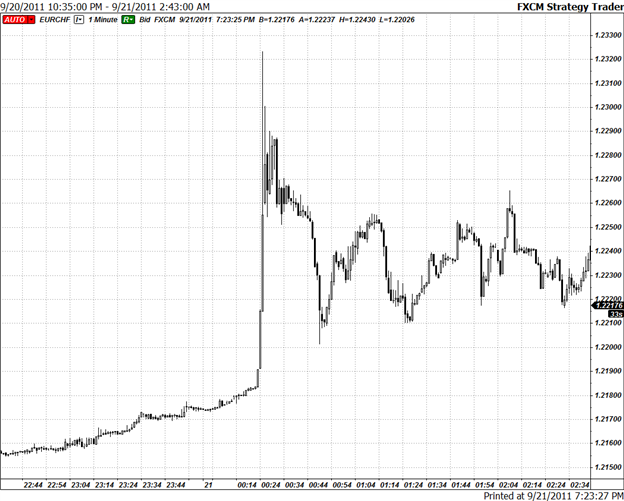 Similarly, on September 21, amid the rumors of the Swiss National Bank preparing to intervene, European-based hedge funds – namely French and German institutions – dumped their Franc-based holdings in favor of the Euro. This move was done in order to adjust market positioning ahead of a higher floor. Such a move, again, in a matter of minutes, underscores the severity of this threat. 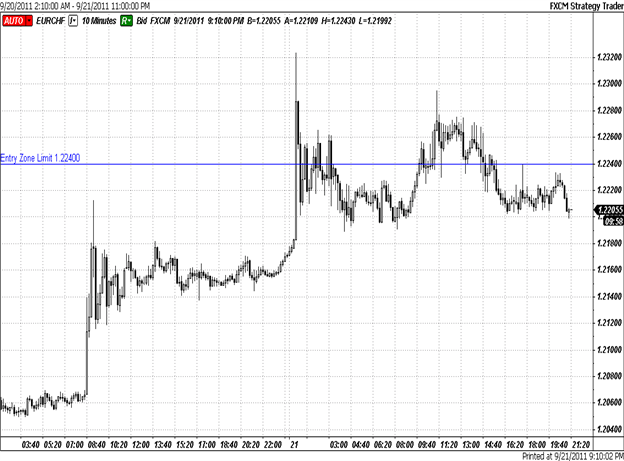 On the final chart, what is discernible is that market anxiety leads to short squeezes in the EUR/CHF pair. A simple glance over the moves necessarily suggests that advances are not being met with corrective behavior, a sign that the broader markets are forecasting another move higher.

Is an intervention guaranteed? No. The threat of further interventions has limited the decline of the EUR/CHF in the two-plus weeks since the peg, a sign that market participants are taking the threat of a higher floor seriously. Rumors alone are enough to drive markets recently; assets have been trading headline-to-headline, so it seems. With markets focusing on the possibility of a Greek default, any moves higher by the EUR/CHF stoke further buying, as market participants remain fearful of getting stuck on the wrong side of another Swiss National Bank mandate.

With that said, the strategy is proposed as follows: place a Buy Limit Order at or below the 1.2200 to 1.2240 area. Resistance has been noted above the 1.2240 level, finding further topside resistance around 1.2280. Moves above these areas are unlikely on pure fundamentals, and have been provoked by “fear buying.” Buying below the 1.2200 area is especially appealing, as corrective moves lower are likely to be met with sharp rebuttal by the Swiss National Bank.

While the timeframe is Buy and Hold, this trade entry points should be only entered and queued during the hours of 03:30 GMT to 15:30 GMT. Over the past few weeks, moves by the Swiss National Bank have occurred at the start of European trading (European markets begin to open at 06:00 GMT) and at the close of European trading (roughly 15:30 GMT), while the panic buying of EUR/CHF has happened at approximately 04:00 GMT and 12:00 GMT. After said times, the entry orders should be removed, as prior interventions have yet to occur outside of this frame.