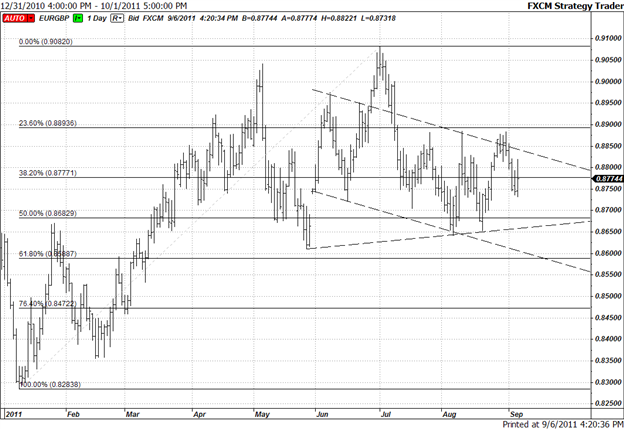 The Euro-Sterling pair has been trading to the downside for the better part of the past three plus months, despite brief rallies at the end of June, the middle of July, the beginning of August, and most recently, the end of August. Since July 1, the weekend that the Greek parliament finalized the terms of their bailout following rounds of votes earlier in the week, the Sterling has been one of the strongest performing currencies against the Euro, behind the Japanese Yen and U.S. Dollar, respectively.

Now that the Swiss Franc can no longer serve as a safe haven currency and will be used primarily as a funding currency, there exists a need for another safe haven alternative against the Euro. Enter the British Pound. With the EUR/GBP failing to break above a significant Double Top set in mid-July and mid-August, as well as holding above its Range Bottom dating back to early June, as well as another shorter-term rising Trend Line a breakout opportunity to the downside looks to be on the horizon.The broader fundamental picture that is worsening sharply for the Euro and the Euro-zone confirms this bias.

The chart above shows the Fibonacci retracement levels for the EUR/GBP pair, and what is expected out of the EUR/GBP in the coming weeks, with our bias in favor of Sterling strength and Euro weakness. Save nine days straddling the end of June and the beginning of August, the pair has remained entrenched in a sideways-to-descending channel, since the start of June. Similarly, the pair trades just below its 38.2 Fibonacci retracement level at 0.8777, from the 2011 Low set in January (0.8284) to the 2011 High set in July (0.9082). 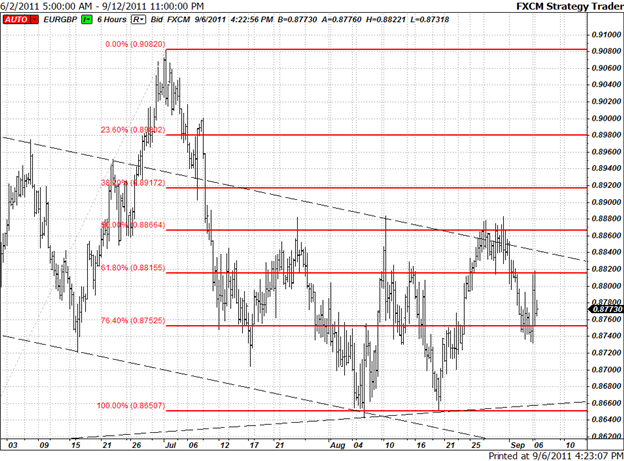 As noted two weeks ago when this trade was originally suggested, the “EUR/GBP appears to be biased to the upside on shorter-term time frames, as the pair has begun to exhibit a potential shift in trend to the upside, with higher highs and higher lows, only if slightly.” Indeed, following the original report, the pair traded higher, but has since come under pressure once more. Nonetheless, the EUR/GBP was unable to break through its Double Top (now Triple Top) resistance as well as the 50.0 Fibonacci extension (May 5 High at 0.89020, the May 26 Low at 0.8610 to the July 1 High extension at 0.9082). A test of the rising Trend Line, and Double Bottom, appears likely now.

Trading Tip – The EUR/GBP remains biased to the downside in the medium-term now that the short-term shift in technical structure to the upside has played out. Similarly, the fundamental picture has not only shifted away from the Euro, but in favor of the Sterling as a potential safe haven if various governments continue to intervene in the markets, as is expected. The daily RSI remains capped by the 60 level, trading at 49; in a bear market, the RSI often fails to break above the 50 to 60 area. The daily RSI has not moved above this zone since July 4. Similarly, the MACD Histogram suggests momentum to the upside is capped, with the indicator close to diverging bearishly at +0.4 currently. The Slow Stochastic oscillator suggests further losses in the near-term, with the %K less than the %D, at 45 and 53, respectively.

The Credit Suisse Overnight Index Swaps point to a similar conclusion. Currently, markets are suggesting that rates will be unchanged on Thursday, with a 0 percent change of a 25.0-basis point rate hike. Similarly, there are 30.3-basis points being priced out of the Euro for the next 12-months, signaling a potential rate cut in the future.

United Kingdom – The Bank of England’s Monetary Policy Committee is expected to maintain its key benchmark rate at 0.5 percent at its meeting on Thursday, the thirty-first consecutive month at such a rate. The primary underlying reasonto maintain the rate continues to be the Monetary Policy Committee’s focus on economic growth rather than on reducing inflation, which ticked higher recently.The United Kingdom is facing an inflation rate of 4.4 percent as of July, more than double its target of 2 percent. Policymakers agree that the economy is not stable enough to withstand higher rates at the current time, given the eroding condition the housing and labor sectors. Traditionally, an inflation rate of this level would be a signal for the Monetary Policy Committee to increase the bank rate.

With economic recovery expected to be shaky in the short and medium-term, the Monetary Policy Committee will likely hold the bank rate at 0.5 percent through at least the end of 2011. The Overnight Index Swaps point towards the same conclusion, with a 3.0 percent chance of a rate hike expected at the meeting on Thursday, and 9.7-basis points priced out of the Sterling over the next 12-months.

To contact the author of this report or be added to his distribution list, please send inquiries to: cvecchio@dailyfx.com