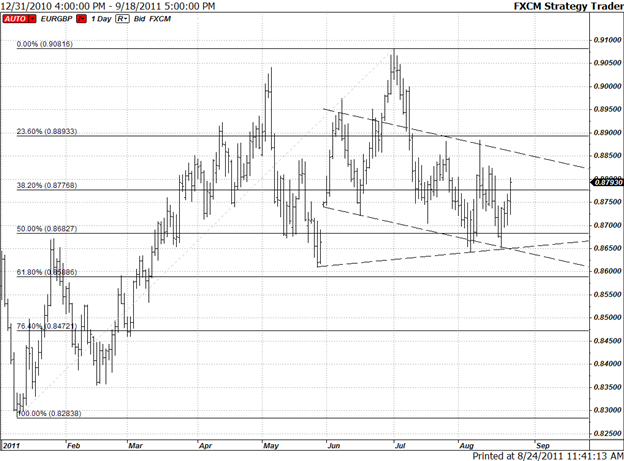 The Euro-Sterling pair has been trading to the downside for the better part of the past three plus months, despite a short rally at the end of June. In fact, since July 1, the weekend that the Greek parliament finalized the terms of their bailout following rounds of votes earlier in the week, the Sterling has been one of the strongest performing currencies against the Euro, only behind the Swiss Franc and Japanese Yen, respectively. Fears of intervention by the Bank of Japan and the Japanese Ministry of Finance, as well as the Swiss government and the Swiss National Bank, have weighed on the historical safe havens’ combined ability to serve as a hedge against risk in recent weeks.

Since the series of manipulative measures by Japanese and Swiss officials began in the first week of August, the Sterling has served an alternative safe haven asset, as the third-strongest major currency against the U.S. Dollar. As such, with the EUR/GBP sitting near its Range Bottom dating back to early June, as well as another shorter-term rising Trend Line, given the surrounding fundamental picture that is looking increasingly worse for the Euro-zone, as well as volatility expectations, a breakout opportunity to the downside has emerged.

The chart above shows the Fibonacci retracement levels for the EUR/GBP pair, and what is expected out of the EUR/GBP in the coming weeks, with our bias in favor of Sterling strength and Euro weakness. Save nine days straddling the end of June and the beginning of August, the pair has remained entrenched in a sideways-to-descending channel, since the start of June. Similarly, the pair trades between its 38.2 and 50.0 Fibonacci retracement levels, from 0.8777 to 0.8683, respectively, from the 2011 Low set in January (0.8284) to the 2011 High set in July (0.9082). 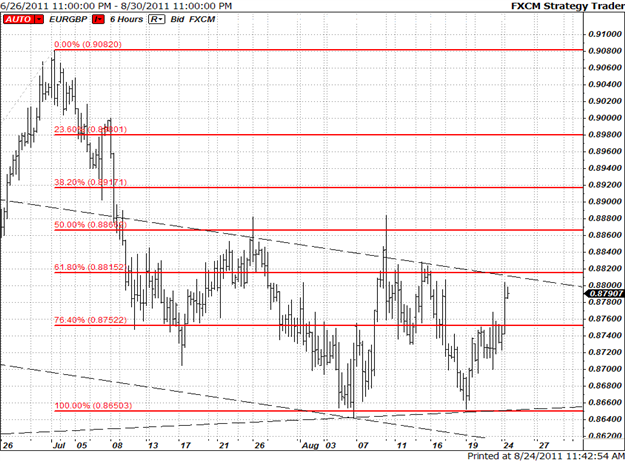 The EUR/GBP appears to be biased to the upside on shorter-term time frames, as the pair has begun to exhibit a potential shift in trend to the upside, with higher highs and higher lows, only if slightly. Nonetheless, considering the EUR/GBP was unable to break a technically weak 76.4 Fibonacci extension (May 5 High at 0.89020, the May 26 Low at 0.8610 to the July 1 High extension at 0.9082) on a trading day marked by risk-appetite (as noted earlier, the Sterling has served as a hedge against risk in recent weeks), our bias suggests further losses.

Trading Tip – The EUR/GBP remains biased to the downside despite short-term shifts in technical structure, as the fundamental picture has not only shifted away from the Euro, but in favor of the Sterling as a potential safe haven if various governments continue to intervene in the markets. The daily RSI remains capped by the 60 level, trading at 53; in a bear market, the RSI often fails to break above the 50 to 60 area. The daily RSI has not moved above this zone since July 4. Similarly, the MACD Histogram suggests momentum to the upside is capped, with the indicator close to diverging bearishly at +6.9 currently (the differential has narrowed from +9.0 on August 15, though has ticked higher in recent days as short-term structure has shifted). On the other hand, the Slow Stochastic oscillator suggests further gains in the near-term, with the %K greater than the %D, at 48 and 39, respectively. A break lower by the EUR/GBP will shift all the indicators into sell signals, as is expected, and a break below the key Trend Line support will expose long-term Fibonacci retracement levels dating back to January on a breakout.

Data is thin this week across the markets, though the Euro-zone bears the burden of having the bulk of important data on the docket. Still, the most significant event from either area comes out on Friday, when second quarter growth figures are due for Britain.

Euro-zone – With the bulk of European data off the docket for the week, the markets will look towards two reports out of Germany on Friday, before European Central Bank President Jean-Claude Trichet speaks at the Federal Reserve’s Economic Policy Symposium in Jackson Hole, Wyoming.

United Kingdom – The most significant data comes out on Friday, when second quarter British growth figures are due: a 0.2 percent expansion, on a quarterly basis, and a 0.7 percent expansion, on a yearly basis, are forecasted. Growth has continued to remain low in the country home to the world’s oldest fiat currency, despite measures by the Bank of England to encourage growth, specifically, keeping the key overnight benchmark interest rate at 0.50 percent since March 2009.

To contact the author of this report or be added to his distribution list, please send inquiries to: cvecchio@dailyfx.com