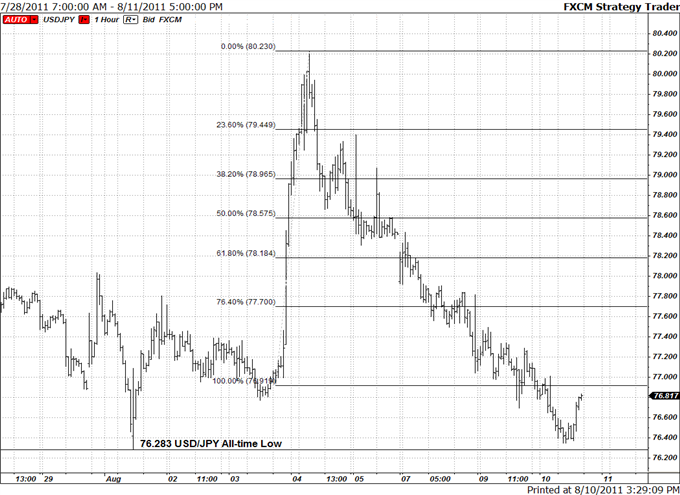 JPY-Crosses: Preparing for a Yen Intervention

Now that the USD/JPY is trading below its exchange rate prior to the August 4 Ministry of Finance intervention, as investors continue to favor the Yen as a safe haven amid the deepening European sovereign debt crisis, another intervention is likely on the horizon in order to combat haven flows.

Considering not only recent commentary by Japanese government officials stating that they are “watching the currency markets” carefully, but also the fact that yesterday, the Federal Reserve decided to leave rates low for an extended period, until “mid-2013,” further pressure is likely on the USD/JPY over the medium-term, essentially forcing one of the two Japanese governmental institutions to step in order to stem the Yen’s rally across the major currencies. It should be noted that Yen-crosses could depreciate further before an intervention, as the USD/JPY has been intervened at decreasing exchange rates upon each occurrence.

Please note that the trade recommendations contained here within are advised only under the pretext of an intervention to weaken the Yen, as broader macroeconomic trends are dictating further market uncertainty and thus capital flows into the safe haven currencies in the near-term, and any appreciation of currencies against the Yen, in the author’s opinion, are likely to be short-lived.

The above chart, an updated hourly snapshot of the USD/JPY, details the finer aspects of the intervention move by the Ministry of Finance. The Fibonacci retracements, from the low ahead of the Asian session open at 76.919, to the post-intervention high at 80.230, show that over 100.0 percent of the move following the currency manipulation has been retraced. The USD/JPY, despite some fluctuations on very short timeframes, has depreciated nearly linearly since peaking at 80.230, falling as low as 76.344, just above the all-time low set on August 1, at 76.283. In light of the recent price action, the suggested strategy on how to position trades on a possible intervention has been update, now that the USD/JPY has since retraced the entire intervention rally. 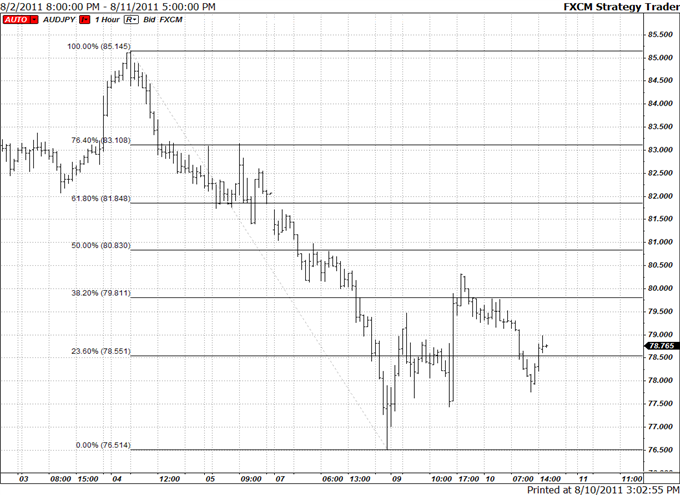 The above chart details the AUD/JPY moves over the past week following the intervention. The pair easily retraced the Ministry’s manipulation, trading back to the pre-intervention level within just over 12-hours. The AUD/JPY should be watched carefully in light of an intervention, as it represents the most significant carry trade among the major currencies currently, and thus presents the greatest opportunity to the upside should market conditions allow for further appreciation. On the other hand, diminished rate hike expectations have weighed on the Australian Dollar in August, as it is the worst performing currency over said timeframe, and therefore gains are likely limited. 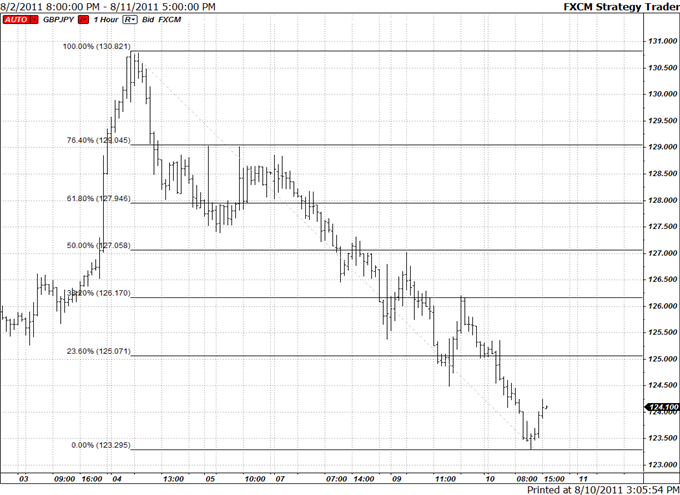 An interesting currency to trade against the Yen, in my opinion, is the GBP/JPY. The pair had one of the more exaggerated responses to the intervention on August 4, rallying over 400-pips on the move – the AUD/JPY and USD/JPY only rallied approximately 300-pips each. As such, considering that the Sterling has been the strongest non-safe haven currency today, it has momentum in its favor, certainly something that can be exploited for now should an intervention occur.