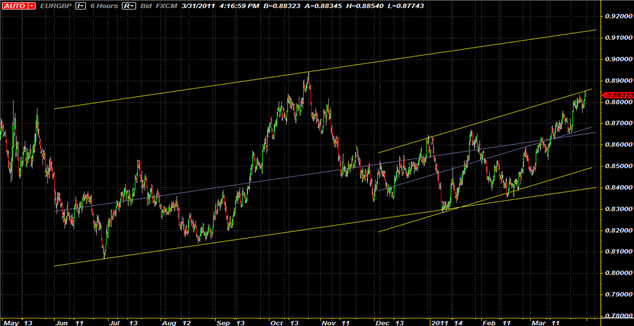 As noted earlier in a separate report that the EUR/GBP pair had been trending to the downside starting in the middle of January, “following commentary by the European Central Bank that interest rates are likely to rise as soon as the next meeting in April, the pair immediately reversed course and began its push towards fresh yearly highs.” Accordingly, the EUR/GBP set fresh highs earlier this week, and appears to have further room to run. The larger ascending channel has been early June, with the pair reaching its peak in late October, before tailing off into the end of 2010. A smaller, sub-ascending channel has been firmly in place since the second week of December, and now the pair is sitting at the range top of the smaller channel. Now, with the pair having gained steadily over the past few weeks, coupled with it sitting at the top of the sub-ascending channel’s range, a swing trading opportunity has emerged for traders to collect profit on a potential correction in the EUR/GBP pair.

Trading Tip – A EUR/GBP pair short appears ripe for the picking. From mid-February until now the pair has marched higher, with four to five days of gains followed by two or three days of smaller retracements. This trend was recently broken, as the pair has not moved in the same direction after Monday on consecutive days. On the daily chart, the RSI is overbought at 70, and the Slow Stochastic oscillator just issued a sell signal with the %K less than the %D at 88 and 90, respectively. On the six-hour chart, the pair hit the range top of the sub-ascending channel and fell immediately. The RSI is quickly approaching overbought conditions as well, and the MACD Histogram remains bearish, and is trending lower. Of note: the long-term descending trend line dating back to late October 2009.

Event Risk for the Euro-zone and the U.K.

With the majority of the week now over, there is little significant even risk on the horizon for Friday. Nonetheless, some events are on the docket for both the Euro-zone and the U.K. that could propagate some short-term volatility. Most of the data that could drive the pair headed into April will come out of Germany, with consumer spending data and growth indicators due on Friday.

Euro-zone – With the Euro-zone unemployment rate for February expected to have remained unchanged at 9.9 percent, the most significant data tomorrow that could drive Euro-based pairs comes from Germany, in two-fold. First, early in the European session, retail sales figures will be released for Europe’s largest economy, which are forecasted to show further increases in consumption, though at a decreasing rate both on a monthly and a yearly basis.

U.K. – With only one event expected tomorrow from Great Britain, a significant ‘miss’ on the data would need to be the driving factor to send Pound-crosses lower. However, the purchasing managers’ index for manufacturing is expected to soften to 60.9, from 61.5 in March. Although the index shows further expansion in the manufacturing sector, it comes at a slower pace, which suggests that the British economy could be slowing.