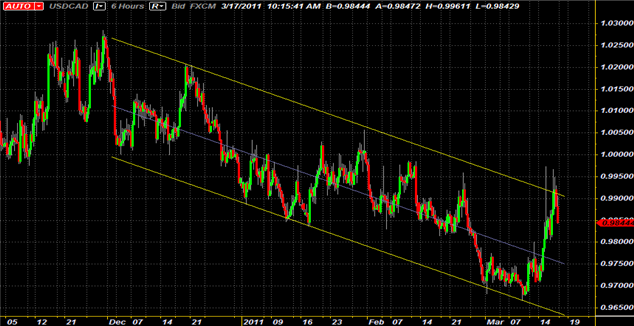 Last Thursday, I noted the descending channel that the USD/CAD pair has carved out since mid-November. I wrote: “The USD/CAD pair has continued hold below parity, despite events in recent weeks that would usually dictate a shift to risk-aversion…[N]onetheless; the USD/CAD pair continues to hold in its descending channel. After failing to break through the psychologically significant 0.9700 level during the last week of February and the first week of March, the pair jumped above 0.9973, yet was still unable to break parity and close above its range top.” The trade was able to collect at maximum 130-pips if exited, and remains in the money with 40-pips still in the black. With that said, our bias to the downside remains, and with technical indicators pointing towards further losses, our trade holds for a third consecutive week. 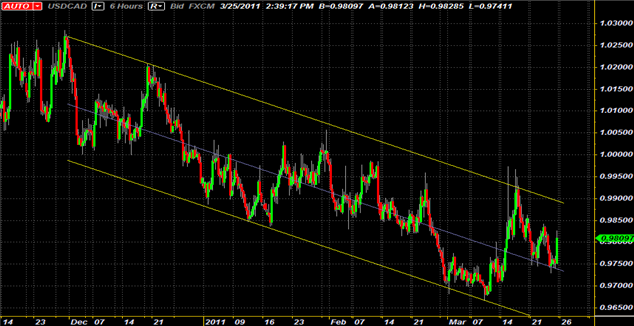 Trading Tip – Last week I noted: “Now, after touching the range top and falling below our trade from last week, the swing trade is still in play. In fact, the technical patterns are now where we expected them to be. On the six-hour chart, the RSI is now coming off of overbought conditions, and the MACD Histogram has indeed peaked, with the bullish divergence tailing off rather quickly.” The USD/CAD pair has been trading above its channel’s regression, bouncing off of it on multiple tests this week. As such, failure to break the trend line has caused bear momentum to soften slightly. Our bias remains to the downside, however, as today’s gains wiped out nearly all of the gains over the past few days. With the RSI declining on the 4-hour chart, coupled with a Slow Stochastic oscillator which is trending to the downside once more, momentum is shifting back in favor of the Loonie. In fact, despite today’s announcement that the Canadian House of Commons had voted to oust the Harper government, the USD/CAD pair did not appreciate in the aftermath of the news, further affirming our confidence in Canadian fundamentals.

Next would will likely be a volatile week for the USD/CAD pair, with heavy event risk coming from the U.S. at the beginning and the end of the week, and Canadian growth figures due in the middle of the week. Most of the risk comes from the U.S. though, with consumption due to start the week, and labor market data to end it on Friday.

U.S. – The U.S. has a steady flow of data all week, with a notable portion of it registering as medium- or high-significance. Consumption data starts of the week on Monday, which has been ticking higher recently, as evidenced by data released this week. The most important piece of data that will be released on Monday however will be the pending home sales data from February, following the horrid new home sales data that was revealed earlier this week. Further deteriorating of the U.S. housing market could put significant downward pressure on the Greenback across the board.

Canada – Data is light this week for Canada, with the most significant piece being growth figures from January. However, considering the components of GDP are well-documented before the release of the aggregate figure, the price action sparked by the release could be limited. Before then, price pressures at producers’ gates will be measured by the industrial product price index, which is released on Wednesday. Of note: Canada is one of the few, if only, advanced economies to face little price pressure since global quantitative easing steps began.