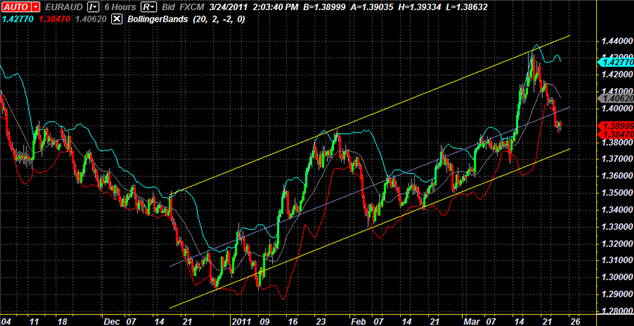 After pushing as high as 2.1000 in late 2008, the EUR/AUD pair has been in a steady decline, with only the past few months marking the start of a new ascending channel for the pair. However, after bottoming out near 1.3000 at the turn of the year, culminating with a double-bottom forming straddling the last week of December and the second week of January, the pair has steadily been ascending. The EUR/AUD pair appears to have completed its most recent corrective wave, having come off of its range top and moved towards the range bottom rather quickly. Similarly, the move from the first week of January to present appears to show that the pair has completed its 1st and 3rd impulse waves, as well as the 2nd and 4th corrective waves; a break to the upside now would fit appropriately with the 5th impulse wave. With the pair sitting just above its 20-SMA, and above the 50-SMA and range bottom, a swing trading opportunity has emerged for traders to collect profits on a long EUR/AUD pair trade.

Trading Tip – The EUR/AUD pair has seen wide swings to start the year, trading mostly to the upside, gaining as much as 1400-pips in the process from its low just below 1.3000. The ascending channel to start 2011 has pushed the pair out of its longer-term descending channel, though the pair has retraced back to its range top; in fact, on the monthly charts, going back to June 2009, the pair is sitting just below the range top. However, given the breakout earlier this month, our bias now points towards the upside on rate hike expectations out of the European Central Bank, coupled with a deteriorating Australian economy (due to inflating house prices, not dissimilar to the situation in the U.S. housing market in 2007). Our shorter-term 6-hour charts point towards another swing upwards in the ascending channel too: the RSI is approaching oversold conditions, while the MACD Histogram appears to have peaked, considering the differential has narrowed over the past few hours, as indicated on the 60-minute and 120-minute charts. Accordingly, the Slow Stochastic oscillator has just issued a buy signal, with %K higher than the %D at 5 and 4, respectively. Overall, should the results of the European Union Summit be positive, there is enormous potential to the upside.

Event Risk for the Euro-zone and Australia

While data is thin for the remainder of the week for the antipodean nation, the Euro-zone has a full plate ahead of it for Friday. However, despite significant French data coming across the wires, the market will be eying commentary and/or results from the European Union Summit, which is focusing on the state of sovereign debt issues in Europe. Considering the Portuguese government collapsed yesterday, the results of the summit are being anxiously waited on by traders, as €70 billion ($99 billion) are forecasted to be given to Portugal for a bailout. Such a move would open the door for bailouts for Spain and Italy, perhaps.

Euro-zone – While growth data from the Euro-zone’s second largest economy is due tomorrow, but it, as well as the typically market-moving German IFO forecasts, will be out of the limelight given the European Union Summit, which is addressing the sovereign debt issues currently plaguing the 17-nation currency bloc. The summit, which was intended to establish a permanent €700 billion bailout fund for the currency bloc, is being overshadowed by the collapse of the Portuguese government. Portugal, edging closer towards bankruptcy, will likely become the third Euro-zone nation in six months to ask for a bailout.

Australia – Australia has no more data due later today or tomorrow, suggesting that any volatility sparked in Aussie-crosses will have to come from the counter-currency. Bullish commentary today by the Reserve Bank of Australia suggesting that the country’s banking institutions will be able to weather the natural disasters that affected the country in recent months, and that growth expectations for the rest of the year remain at their current levels.