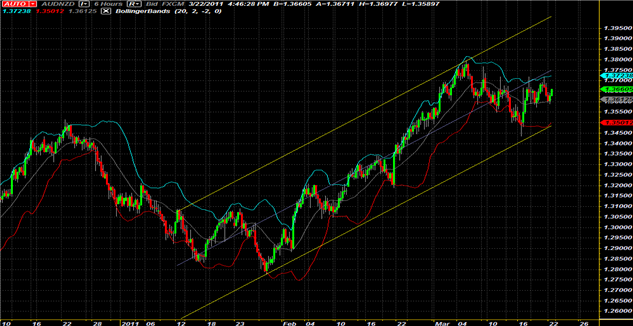 After gaining over 900-pips from the end of November to the end of December, the AUD/NZD pair nearly retraced all of its gains, retracing over 700-pips headed into the last week of January. As risk-appetite intensified over the next few weeks, there was flock to Aussie-crosses (among other risky assets), and hence sending the AUD/NZD pair higher; the AUD/NZD pair itself rallied approximately 1000-pips from the second week of January through the first week of March, particularly following the earthquake in Christchurch, New Zealand. This move coincided with the longer-term ascending channel trend, in place since July. Now, after the pair completed its corrective wave within its ascending channel dating from the second week of January to present, and touching its range bottom, it appears there is a swing trading opportunity to the upside over the coming hours and days.

Trading Tip – The AUD/NZD pair has seen wide swings over the past eight months, trading mostly to the upside gaining as much as 1700-pips during this time frame, though the retracements have been over 500-pip swings themselves. After completing its most recent 300-plus-pip corrective wave, there is room for the AUD/NZD pair to gain within its channel. The next leg up has stalled somewhat, but our bias remains to the upside. On the daily chart, the RSI stalled its decline, and has since rebounded back towards 60; this coincides with the MACD Histogram tailing off of its bearish divergence, with the differential narrowing – on the 6-hour chart, this differential has closed. Momentum remains to the upside, as evidenced by the buy signal issued by the Slow Stochastic oscillator with the %K trending higher than the %D at 56 and 45, respectively.

Data is thin out of the antipodean nations this week, not just in volume, but in importance as well. Only one highly significant event is on the docket, which comes from New Zealand, tomorrow. Growth data, while market moving, is not as significant as unemployment data, per se, considering the components of GDP are known before the actual data release. Nonetheless, we expect it to generate some volatility after the release. The AUD/NZD pair has a 8.58 percent Implied Volatility reading for the next week.

Australia – Australia has released no data this week thus far, and has little ahead on the docket in terms of scheduled event risk. Tomorrow, the Conference Board leading index for January is due; it is a gauge that forecasts the short- and mid-term growth of the Australian economy. The index grew by 0.7 percent in December, and very well may show an increase in January. But, with the recent stumble in the global recovery, coupled with rising inflationary pressures worldwide and a decline in the carry trade – the index could fall in the coming months.

New Zealand – The antipodean nation will see growth trade data come across the wires later in today’s session, with current account balance figures due. A stronger Kiwi in the fourth quarter is likely to have increased the deficit, but because the data is trailing, it may not have that great of an effect on the market. The same can be said about the gross domestic product data due on Wednesday, mainly because the market is more concerned with the economic pullback as a result of the earthquake in Christchurch last month.