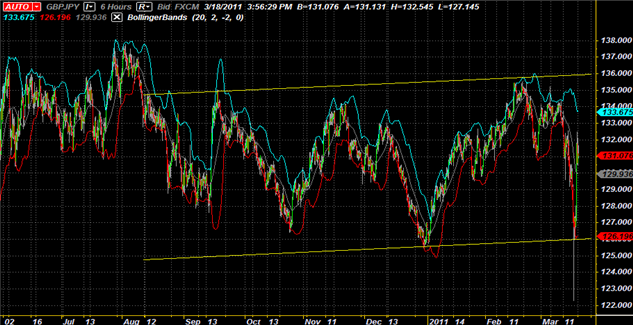 The GBP/JPY pair has continued to trade in an exceptionally choppy sideways channel for nearly seven months, carving out a 1000-pip channel in the process (note: the steep 500-pip depreciation on Wednesday is discounted as, if you remove the wicks, the pair did not close below the range bottom but rather bounced off of it). The Yen, gaining across all the major currencies as speculators ramped up bets that Japan would repatriate funds in order to help rebuild following the natural disasters and ensuing nuclear turmoil last week, look prepared to break below the range bottom; instead, on the heels of a joint-intervention effort by the G-7, the GBP/JPY pair shot up in its channel. Now, as it is clear that global monetary policy has shifted to keep the Yen weak, and after the pair failed to pass its test moving above its 100-SMA, a swing trading opportunity has emerged to the upside.

Trading Tip – The GBP/JPY pair has seen wide swings over the past seven months, trading mostly sideways though the bias has been to the upside on the intervention and the fact that the pair remains 400-pips its range bottom. Similarly, the pair is 400-pips over the level it started the year at. The GBP/JPY pair is definitively in the next leg up of its swing trade, and although a few hundred pips were missed out on already, given the volatility of the pair, and the necessity for the Yen to weaken, a confirmation of our bullish bias with a close above the 100-SMA in the next 48-hours confirms our trade. The RSI on the daily chart is rising sharply, and the MACD Histogram is tailing off of its bearish divergence quickly. The Slow Stochastic oscillator confirms the move north, with a %K greater than the %D at 40 and 25, respectively.

Event Risk for the U.K. and Japan

Both the U.K. and Japan have a heavy stream of data due out nextweek, though most of the significant data comes from the U.K. Inflation data is due, which could spur further hawkish commentary from Bank of England policymakers. To this end, the minutes of the most recent Monetary Policy Committee meeting will be released next week as well, which, if indicates rate hike expectations, will send the pair higher.

U.K. – Price data for the U.K.’s struggling house market is due Monday; an increase in prices would be welcomed, as it would signal the recovery is starting to find firm footing. The consumer price index is expected on Tuesday, the most important news release of the week. The CPI is the key measure of inflation for the UK and is used by the Bank of England in making interest rate decisions. The report tracks changes in the price of a basket of goods and services that a typical.

Japan – With no significant data due over the next few days, the focus remains on rhetoric coming from the Bank of Japan, the recovery efforts in Japan; if they lag, or if the nuclear situation worsens, it is possible to see another sharp depreciation as more funds are repatriated. On the other hand, with it now clear that there will be a coordinated effort to devalue the Yen, any depreciation could be met with further intervention.