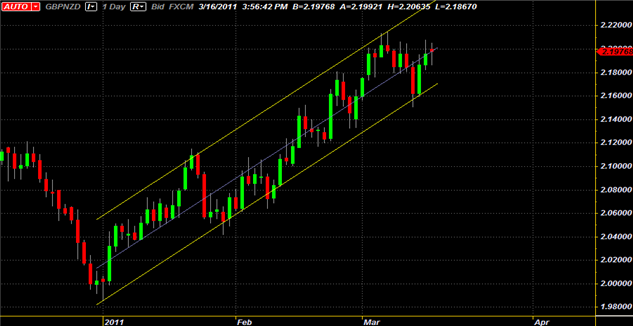 The GBP/NZD pair has experienced quite a choppy ride over the past year: it nearly touched 2.3000 in the first quarter of 2010; in the second quarter it fell as low as 2.0300; the third quarter was marked by a 1300-pip range, and in the fourth quarter of 2010 the GBP/NZD pair dropped below 2.0000. 2011 has been quite profitable for traders on the long side of the trade, as the pair has been in a steady, sharp ascending channel over the past three months. Given the appreciation, however, in such that the pair has traded in a 2000-pip range since the start of the year, and noting that the bullish momentum cooled off rather quickly in the first two weeks of March, it looks like the bull run could be over. Now, with the GBP/NZD pair sitting in the middle of its ascending channel, there is an opportunity for swing traders to collect profits as the pair looks to test its range bottom once more.

Trading Tip – The GBP/NZD pair has been swing trading in a clear ascending channel over the past three months, carving out a near-2000-pip range over said time frame. Now the pair is sitting right at its channel regression, having broken higher after testing its range bottom and 20-SMA on March 11. The test failed, allowing the pair to remain within its long-term ascending channel. Accordingly, on overbought conditions, our bias is to the downside for the pair, as it has been unable to post consecutive closes above the key 2.2000 area; confidence is waning in the bullish momentum. The GBP/NZD pair could fall back towards its range bottom relatively soon, and given the extreme overbought sentiment that is gathering, a breakout of the ascending channel could occur. Currently, the RSI on the daily chart has started to fall, now at 60, while the MACD Histogram confirms falling momentum with a bearish divergence recently emerging over the past few days. The Slow Stochastic oscillator, while falling, now has its %K and %D equivalent to one another, at 62. Should the %K cross below the %D, our sell signal is confirmed.

Event Risk for the U.K. and New Zealand

Neither country has significant economic data due tomorrow, thought Britain has a few pieces of noteworthy data due Friday that could spark some short-term volatility. Nonetheless, the main focus will be on the sovereign debt restructuring negotiation in Europe – that could cause investors to leave the Euro for the Pound and Swiss - and the clean-up effort in Japan – which, if the speculation on repatriation of funds true, could cause investors to draw money out of New Zealand, thus weakening the Kiwi across the board.

U.K. – Tomorrow’s docket is empty, though some data of medium-significance is expected on Friday. Consumer confidence will surely move the Pound, as the British gauge measures not only current conditions, but also future expectations. Accordingly, data on consumer credit will be released, as public finances data is due Friday as well.

New Zealand – With no significant data due for the remainder of the week, any shifts in Kiwi-based crosses will likely be spurred on by Asian and Pacific Rim investors pulling money out of countries out of the vicinity of Japan, such that they can help fund the rebuilding and clean-up – a process known as repatriation.